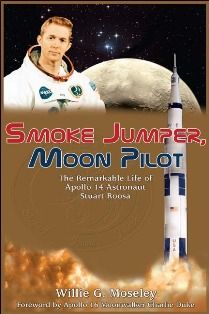 Currently a senior writer for Vintage Guitar Magazine and editor/columnist/photographer for The Tallassee Tribune, Willie G. Moseley has written an entertaining and informative biography on the life of astronaut Stu Roosa in Smoke Jumper, Moon Pilot, Moseley’s eighth book. Stuart Roosa was a colorful, adventurous character whose life experiences ranged from a summer as a smoke jumper, parachuting into isolated areas to fight fires for the U.S. Forest Service, to orbiting the Moon in 1971. In between those jobs he was a fighter pilot for the Air Force.

Author Moseley recounts the hilarious efforts made by Roosa to impress the woman he would eventually marry. Earning his flying wings in 1955, Roosa began piloting an F-84F Thunderstreak and later Super Sabre jets for the 510th Fighter Squadron. Roosa could be compulsive at times, proposing to his soon-to-be wife Joan on their third date. She turned him down but Roosa would not be deterred. The Langley Air Force Base pilot decided that drastic measures would be needed to get her attention: He’d fly his supersonic Sabre “to treetop level” over the houses hosting parties where Joan would be on dates with other men. When he flipped on the jet’s afterburner, a thunderous “boom!” would prompt party attendees to drop to the floor as Virginia homes shook as though an earthquake had struck the East Coast. The brazen suitor finally convinced Joan that he was committed to her when he announced at a party that she had agreed to marry him. However, Joan had done no such thing. Eventually she agreed and Roosa’s introduction to his future in-laws was to “buzz” their home in a jet as he had previously at Joan’s soirees. Duly impressed, his future father-in-law gave Roosa a list of friends whose homes he also wanted “buzzed” by the pilot.

In writing of Roosa’s assignments, Moseley details how the 510th squadron “would practice standard flight nuclear warhead delivery missions” when F-84F jets would be deployed on practice runs whose purpose would be to perhaps one day drop nuclear bombs on the Soviet Union since intercontinental missiles had yet to be perfected. The squadron’s uniform patch included a ”three-orbit atom to signify its mission.” Moseley shares a chilling quote from Roosa’s son, Jack: “My father used to describe this maneuver quite a bit…. He never told me what his target was in Russia, but he did tell me that he would not have enough gas to make it back. It was a one-way mission.”

The January 1967 Apollo 1 tragedy that killed astronauts Gus Grissom, Ed White, and Roger Chaffee when a fire broke out in the Apollo capsule during a routine test is described in riveting detail. Roosa was the CapCom the night of the disaster. (The CapCom is the person—always an astronaut—who communicates with the crew during a mission as well as on mission simulations and tests.) Roosa was in a bunker 500 yards from the blazing launch pad and was among the first to reach the dead astronauts. A faulty electrical wire sparked in the pure oxygen environment, resulting in the deadly inferno. Moseley writes that Roosa was skeptical of NASA’s investigation conclusions, and one day blurted to son Chris that “there were only two people who knew the real story about what had happened—Deke Slayton and himself. And Roosa said nothing more about that pronouncement.”

The author’s account of how the first American in space, Alan Shepard, returned to flight reveals a remarkable slice of insider space history. Shepard had been grounded a few years after his 1961 flight due to an inner ear infection, which surgery later corrected. Not having flown in eight years, Moseley writes that Shepard reportedly told Deke Slayton, who was the Director of Flight Crew Operations, that he wanted to be the commander of the next lunar mission, which was Apollo 13. Shepard was essentially throwing his weight around as the first American space voyager; a sympathetic Slayton agreed to let him not only be Apollo 13 commander, despite not having flown for nearly a decade, but to also choose his own crew—rookie space travelers Stu Roosa and Ed Mitchell. When Shepard chose Roosa to be the Command Module Pilot, Roosa allegedly expressed doubt that Shepard’s team would be a primary crew without serving as a backup crew first. Shepard reportedly responded, “I don’t fly backup to anybody!” When Slayton submitted the three to NASA as the primary Apollo 13 crew without having logged time in a backup role, however, the space agency refused. NASA did agree to let them be the primary crew for Apollo 14, which would become the third manned-mission to the Moon in the wake of the Apollo 13 near-disaster.

Author Willie G. Moseley engages the reader with exciting peeks behind the NASA curtain during history’s most far-reaching age of exploration. If you aren’t a space and rocket fanatic before reading Smoke Jumper, Moon Pilot, you might soon find yourself seeking out any of a plethora of books on the history of manned spaceflight. October 2012

Edward Reynolds is a writer living in Birmingham, Alabama.