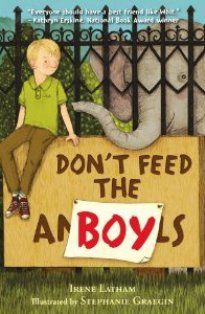 Who wouldn't want to live at the zoo? Eleven-year-old Whit, apparently, the central character in Irene Latham's new middle grade novel, Don't Feed the Boy. Whit is dissatisfied with life at the Meadowbrook Zoo in Alabama, dissatisfied with his busy parents who always seem to put their jobs at the zoo— vet and head elephant keeper—ahead of him, dissatisfied with having no friends since he is homeschooled by the capable and calm Ms. Connie. All of this changes when Whit meets a girl (of course!), Stella, aka the Bird Girl because she draws birds at the zoo and uses the zoo as a refuge from a difficult situation at home.

Whit and Stella become fast friends, and Whit will do almost anything to help Stella and keep her out of harm's way. It's the almost that provides the tension and conflict in this novel. Whit acts with courage—despite some rather questionable choices—even though he may lose Stella as a friend and the trust of his parents. The conclusion is satisfying, and I have no doubt that Whit will make many new friends at Meadowbrook Middle School. The pencil drawings by Stephanie Graegin enhance the narrative and carefully capture—without ever being precious—the dynamic between Whit and Stella. October 2012

Peter Huggins is the author of three books of poems, Necessary Acts; Blue Angels; and Hard Facts; a picture book, Trosclair and the Alligator, recognized as a Best Book by Bank Street College and recipient of a Mom's Choice Award; and an MG novel, In the Company of Owls.