Grace and Grit: My Fight for Equal Pay and Fairness at Goodyear and Beyond 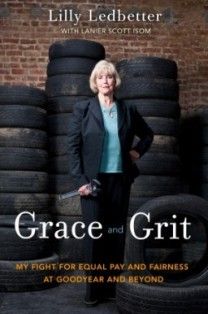 Lilly Ledbetter did not set out to change the workplace; she just wanted to help contribute to her family’s finances, help provide more for her children, and achieve financial stability.

Like many Alabamians of her generation, she was born in a small town (Possum Trot, Alabama) and lived in a house without electricity and running water, amenities that are now taken for granted. She married her husband Charles at seventeen, they had two children within three years of one another, and, like many couples, then and now, found that trying to live on one paycheck was not enough. Going against her husband, Lilly went out and found a job at H&R Block where she eventually worked her way up to managing the office.

From childhood she had known that the best jobs in the area were at Goodyear and she set her sights on being hired by the corporation. At her interview in 1979, the male managers asked if she planned to divorce her husband. During her nineteen years at Goodyear, she was cussed, threatened, harassed, fondled, and transferred between departments when she complained. She dealt with the indignities in order to provide for her family with the hope of doing an excellent job and being rewarded for it.

In 1998 an anonymous note comparing her salary with the men’s was left for Lilly. She was earning thousands of dollars less per year the men. The realization pained her deeply. Filing a discrimination suit against the company that would consume her time and energy for years to come, she found her lawsuit before the Supreme Court eight years after leaving Goodyear. In a five-four vote, she lost on a technicality.

Knowing that the issue was important to all women, Ledbetter continued—and continues—to be an advocate for equal pay. She made many, many visits to Washington, D.C., to talk with committees, visit with politicians, and bring the issue before anyone who might be persuaded to work on the cause. She spoke at both the 2008 and 2012 Democratic Conventions. Her efforts were rewarded when newly-elected President Obama signed the Lilly Ledbetter Fair Pay Restoration Act into law.

Mrs. Ledbetter does not gloss over her life story or the dirty details of sexual harassment and workplace politics. The resulting memoir is a triumph of tenacity over adversity. Only the hardest of hearts would fail to be moved by her sheer determination.

Pam Kingsbury, a former board member of the Alabama Writers’ Forum, lives in Florence, Alabama.