Creatures of the Night: In Search of Ghosts, Vampires, Werewolves and Demons 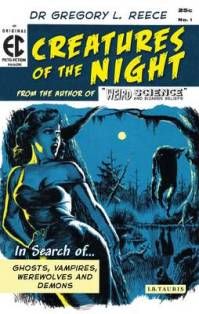 Gregory Reece knows what it means to be afraid. He, like so many of us, has experienced firsthand the heart-pounding terror that so often accompanies scary stories read by flashlight. Though unlike the hoards of horror-obsessed, monster-magazine-reading pre-teens we likely envision, Reece’s own interest in the supernatural—quite thankfully—far transcended his youth. In a society set on stifling the imagination, Reece seems somehow to have eluded capture, and this—coupled with his keen scholar’s eye—makes him the ideal writer for this highly engaging subject.

Prior to delving into the more serious subjects—a parade of ghosts, vampires, werewolves, demons, Satanists, among other creatures of the night—Reece first warms up the reader with his theory on why we don’t fear one of the better-known witches of the world: The Wizard of Oz’s iconic Wicked Witch of the West. “The Witch we can stand…” Reece argues, “…but the monkeys are terrifying.” It’s a pitch-perfect claim, one that leaves the reader wondering, Why? Why—after watching the film for the first time—did the evil witch have so little effect on us, while the flying monkeys quickly became fodder for our worst nightmares? “[The flying monkeys] are outside our understanding,” Reece explains, “part monkey, part bird, and—most terrifying of all—part human.” It’s a thesis that fits well within Reece’s larger framework, one that argues our fears are spurred not by what we don’t know, but what we recognize as a little too familiar.

Whether writing of vampires, werewolves, or any other almost-human creature, Reece steadfastly tracks—not the footprints, but the footnotes—for each of his beasts. Rather than rehash the usual “stake-through-the-heart” and “silver-bullet” theories that have become so imbedded in our culture, Reece reaches back much further, providing all-encompassing histories for the elusive creatures we always thought we knew.

Perhaps most impressive, however, is that Reece manages this scholarly work at the risk of being branded a fringe-science kook. Early on, Reece proves himself as a defender for the unknown, embracing the toxic terrain abandoned by so many others. While his in-depth research does much to arm him against the ivory tower naysayers, his occasional insertion of personal experiences with the supernatural—while interesting—ultimately does more harm than good, undercutting the credibility he has worked so hard to achieve. The book is at its best when Reece refrains from the spotlight, allowing instead his facts to drive fears, rather than his fears muddying the facts.

Despite this minor misstep, Gregory Reece nonetheless still manages to do for the supernatural what Joseph Campbell did for myths—creating a gestalt so that our own world might better understand the otherworldly. June 2012

B.J. Hollars teaches Creative Writing at the University of Wisconsin-Eau Claire and is the author of In Defense of Monsters, and editor of Monsters: A Collection of Literary Sightings.