Trouble on the Tombigbee 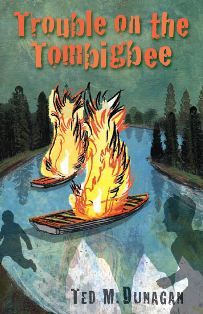 Trouble on the Tombigbee is the third of Ted Dunagan’s Young Adult novels to chronicle the adventures and deepening relationship between two adolescent boys, Ted and Poudlum, one black and one white, in the southwest Alabama of the late 1940s. As with the two previous novels, A Yellow Watermelon and Secret of the Satilfa, the adventures are frequently harrowing, the boys infinitely resourceful, and the suspense finely honed, all resulting in a satisfying, page-turning read.

In this installment, the boys set out innocently enough on a fishing/camping trip on the Tombigbee River. Immediately, they find themselves entangled and endangered by a very dark, shadowy adult world—they stumble onto a midnight KKK meeting and discover the secret identities of two of the group’s leaders. They themselves do not go undetected, and most of the book’s action involves their days-long attempt to elude and outwit their Klan pursuers. In the process, the boys face additional, complicating situations—being held captive by a very mercenary moonshiner, witnessing a vicious murder, evading a relentless kidnapper. They eventually prevail through all their mortal challenges and end up helping bring justice to the people who had threatened them.

Shades of Huck and Tom and Jim are very palpable here. As in Twain’s novels, the seeming innocence of the adolescent protagonists is belied, not only by the sophisticated practical skills with which they escape danger, but by the moral depth with which they confront some of the more confounding aspects of the adult world. While they must occasionally make some ethically unpalatable choices, their overall vision of right versus wrong is solid and sure, and it ensures their victory over the world’s genuine evil.

Herein lies the book’s most satisfying, subtle accomplishment. The novel’s overtly political context profoundly shadows the boys’ relationship—this is an era when, clearly, such relationships between white and black were cause for suspicion, if not outright hostility. However, in their interactions, the two boys really do function as equals. They are equally clever, equally thoughtful and sensitive, and, most importantly, equally dependent on each other. They enact a model of inter-racial mutuality that defies the social prejudices of their time and place, and that could well serve as an ideal for the generation soon to emerge from that time and place.

This subtlety will not be lost on the novel’s more sophisticated readers. But, apart from its political message, the story is a ripping good yarn for any reader. The action is swift and exciting, the characters are complex and engaging. A crowning delight is the descriptive language that evokes the sights, smells, and textures of such a physically rich landscape. The river itself becomes an immutable presence, offering both hazard and refuge, and thus serving as a near perfect setting for this coming of age tale. April 2012

Tony Crunk, a teaching writer in the Writing Our Stories program, is a widely published children’s writer and poet.