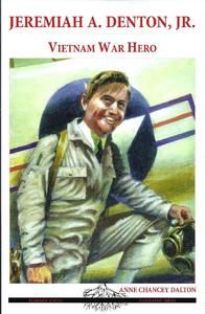 This 104-page book is part of the Alabama Roots series, a joint venture of Seacoast Publishing, Inc., and Will Publishing, Inc., both of Birmingham. The purpose is to provide historically accurate and interesting biographies of famous people from Alabama for students in middle grades.

If this is the first of the series (no other titles are listed), it may be a hard act to follow. Jeremiah Denton was held captive in a North Vietnam prison for more than seven years. He later became an admiral in the Navy and a U.S. Senator. As noted by the author, there have been other books written about him, and a movie was based on his life. This book offers twenty short chapters—all narrated with verve, to spur a young reader’s imagination—and lots of black and white photographs.

Julia Oliver is a Montgomery writer. Her credits are on her website, www.juliaoliver.net.