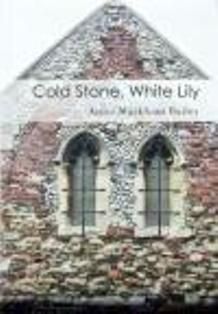 In Cold Stone, White Lily Anne Markham Bailey gives us poems in the voice of a character she has imagined, a fourteenth-century English anchoress named Anne Wyngfield, who lived in an East Anglican village. The poems are careful to include allusions to specific historical events such as the growing influence of the English vernacular on society and the subsequent controversy over Wycliffe’s translation of the Bible into English, allowing the speaker to be both observer and participant in the times.

The book is arranged so as to trace the arc of the speaker’s life, from “Naissance” through “Thirteen,” “Betrothal,” “The Call,” and on to “Last Poem.” This approach has two advantages: it follows Anne Wyngfield’s physical and spiritual maturation, and it also portrays the hardships she endured, including periods of questioning her faith and her decision to take on the solitary role of an anchoress.

So, in “Censing Angels,” we have the speaker asking, “Why did I marry spirit, / promise my years to stones / where fungi and spiders stretch?” She sees herself isolated, a “jawbone in a silver box, / on my altar of shifting light.” But by the end of the poem, despite a priest’s “bungled Latin,” she has recovered her steadfastness: “My faith is re-born / in wings of smoke and stone.” Later, in “English Bible,” we see Wyngfield accept a Wycliffe Bible from an acquaintance, then in “Audience with the Bishop,” she must undergo stern questioning from “His Eminence,” who apparently is suspicious of her sanctioning of the English over the Latin text.

Bailey’s decision to position her speaker firmly in the midst of such controversy points up another implicit focus in the book, that of portraying Anne Wyngfield as an independent woman, the irony being that practically the only way a middle-class fourteenth-century woman could achieve a measure of independence was to give herself—her life—to the church, to isolate herself, in order to find a place in which, as the speaker puts it in “Last Poem,” “I control the door.” Yet Bailey gives us a woman whose primary calling is clear, whose faith and need to be “held in the burning arms of God” are the motivations for her willingness to give her life over to the church.

There is nothing overtly ornate in the way these poems are put together. They’re composed of workmanlike free verse stanzas, the syntax straightforward, the voice consistent throughout. Nothing obtrudes on the autobiographical focus here, and it’s obvious that Bailey has immersed herself in not only the public but the private history of the times, so that we experience with the speaker the “rutted creak of carts” and the “grassy scents like gold.”

One of the pleasures of reading dramatic monologues is that of immersing oneself, via narrative, in another’s sensibility—a trait that we associate with fiction—but dictated by the economy and tautness that only poetry can deliver. While reading Ann Markham Bailey’s Cold Stone, White Lily, I lost the twenty-first century for a while, removed to a place and time that, while foreign to me in both setting and sensibility, were recognizably human, vivid, and true. March 2012