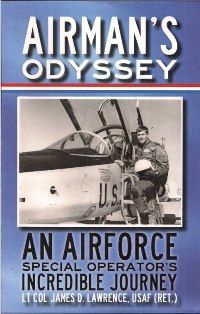 The author of this well-written and impressively organized autobiography spent twenty-seven years in the service of his country. Jim Lawrence, who grew up in Opp, Alabama, recalls that during his pilot training in 1970-71 “[t]here was great intensity and a lot of pressure to learn and apply a new skill each and every day.” After completing service in Air Training Command in 1974, he underwent training in Arkansas before “heading to Okinawa.” Among the twelve titled chapters are: “Iranian Hostage Rescue Attempt (Eagle Claw)”; “Honduras on the Fly”; “Air Commando History Revisited”; and, what would most certainly appeal to older-timers, “Our Greatest Generation—My Boyhood Heroes.”

The foreword by another retired colonel, Richard Brauer, notes that the book “provides the reader not only the personal experiences and operations of this Air Force Spec Ops warrior, but explains the historical military and national dimensions of nearly every recent crisis that has involved US Special Operations Forces (SOF) in recent years.”

Black and white photographs, footnotes at the ends of the chapters, and the author’s enthusiasm and attention to detail make this book an arresting read on a larger-than-life topic. Feb. 2012

Julia Oliver’s column The Literary Scene appears in the Montgomery Advertiser on the third Sunday of each month.