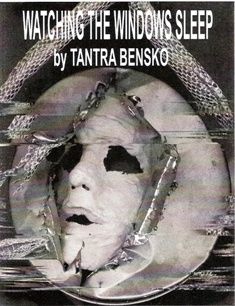 Tantra Bensko describes her work as “experimental literary fiction that looks behind the eyelids,” but to anchor yourself as you join her on a journey through the universe of the sub-conscious, you need only look behind her name.

“Tantra,” or tantric practice, aligns microcosm with macrocosm and makes the ordinary the transportation of choice for reaching an extraordinary that was always already there. Like her experimental forefather, William Blake, Bensko sees “…the world in a grain of sand / and heaven in a wildflower.”

Watching the Windows Sleep consists of six fictions and two poems, the latter being bookends that moderate by both containing and explaining the wild heart pounding between. This expository tendency paradoxically threads its way through the dreamlike tapestry Bensko weaves. Even while the content explodes our expectations of “story,” an age-old literary device—allegory—provides form that hearkens tradition, both ancient and not-so. Think of it as Plato’s cave morphing into Lewis Carroll’s looking glass.

Two lines in the middle of the book (page 25) encapsulate one idea Bensko explores allegorically throughout these pieces:

“The old ways of looking at things are seeming so outdated. You feel sorry for those who are still trapped with them. Whatever those ways were.”

This passage comes from an unidentified narrator in “The Quantum Fool,” the third fiction in the chapbook, but could just as easily be spoken by a yellow-suited chap in “The Accidental Voyeur,” the collection’s first story. That poor fellow’s encounter with a condescending waiter at the “most expensive restaurant in Europe” seems like a surrealistic morality play illustrating every misunderstood artist’s or writer’s frustration with rules and form. In solidarity and perhaps also empathy, “The Boy Who’s a Floating Flower” sings the praises of play and experimentation:

“You have to know what story you’re in before you can get out. The storyteller sometimes likes to just be. Outside of pretending there’s time.”

Time both stands still and circles back and swallows itself in “The Terrace Steps.” A dead grandfather joins his family at the dinner table, and his widow, both aging and dead, talks to birds as easily as she bequeaths a muffin recipe. This fiction follows “The Accidental Voyeur,” which ends with our yellow-suited friend curling his lips “so far backwards they entered his throat and pulled in the whole scene of the restaurant with them,” a vivid conclusion that simultaneously serves as a lead-in to the musing upon time as uroboros.

The opening poem, “Non-Containers,” uses a cracked bowl to allegorize the universe or perhaps reality, priming the reader for enlightenment: “The light / That shows / Between the cracks.” The poem at the other end of this literary microcosm weaves the cracked pieces into a mosaic and reminds us that “The bench we sit on / Is in every flower / With the whole / Scene inside.” The bowl cracks again and Blake’s grain of sand becomes Bensko’s bench, birthing yet another mosaic. Nov. 2011

Bebe Barefoot is a freelance writer who lives and teaches in Tuscaloosa.