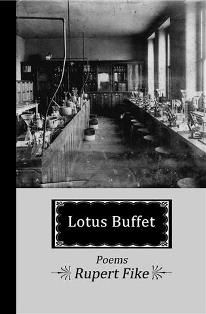 A “lotus buffet” evokes the image of a long table filled with various dishes from India. Just as easily, however, the phrase conjures up a scene in which someone is hit repeatedly with a large aquatic plant. Either image would work for this collection, which is both full and hilarious. In one poem, “Our Liberian Street Preacher, Miss Edna, Makes Her Rounds at Six in the Morning,” Fike recounts how Miss Edna sermonizes his neighborhood. “Actually she screams more than preaches,” Fike begins.

This is how one wakes up in Clarkston —
pray, pray, bark, bark, pray, pray, Jesus, Jesus, woof, woof—

Miss Edna is as good as an alarm clock, waking everyone with her “preaching” and setting off the neighborhood dogs. This poem, like many in the book, is autobiographical; Fike lives with his wife, Kathy, in Clarkston, Georgia, and she, in fact, appears in several of the poems.

A similar poem is entitled “Late Renaissance BO in the Permanent Collection.” Writing about art is a long-standing tradition among poets, but Fike’s approach is original. While viewing a Late Renaissance painting, the poem’s speaker interprets the work through an imagined sense of smell rather than sight. If the man in the painting could leave the painting and come to our world, Fike writes, we would invite him to a party only once.

And when he left (or even before)
we would likely make impolite asides,
a show of throwing open sashes for air
before lighting pitifully thin incense sticks[ . . .]

If the tones of these poems are clearly comic, many of the rest carry at least a hint of reflective amusement. This other tone is informed by a post-World War II sensibility: a rejection of materialism, class awareness, and an interest in Eastern religion.

Throughout this collection, Fike makes a number of post-World War II references, many from the 1960s. These include The Beat poets(in “Origins of Hell,” a speaker even calls Jesus “the beatnik”); drug use; revolutionary leaders, including Che Guevera and Ho Chi Minh; Eastern religion (Lao Tzu, Buddhism, Bodhisattvas, sadhus); the Swiss psychiatrist Carl Jung, who combined eastern and western philosophies; civil protests; concern for the environment; and communes (Fike and his wife spent eight years on The Farm, a spiritual community in middle Tennessee which they helped found in 1971).

Fike isn’t trapped in time, though, and he isn’t ignorant of the history that has occurred since the sixties. For example, “Longshoremen, 1969” represents the hopefulness of post-sixties America mixed with an introspective tone. He writes that they fancied themselves seekers,

[. . .] which we certainly weren’t. Were! Weren’t
No matter, we made stabs at Buddha’s
suggestions, the eight-fold-path,
Right Livelihood by far the hardest,
Right Livelihood propelling us
out the morning door,
down to the docks [. . .]

That year, The Beatles gave their last public performance, an impromptu concert broken up by the police. The Cuyahoga River, in Ohio, caught fire, spurring the creation of the Environmental Protection Agency. Woodstock was held in upstate New York, and Neil Armstrong became the first human to set foot on the Moon.

“Longshoremen, 1969” gives you a feel for what the period must have been like, when the exuberant social upheaval of the sixties was giving way to pessimism and self-centeredness. The “hip-enfants” didn’t know that they had missed the revolution. Fike writes that it was a “Charles Manson summer down in LA.”

Cassidy had been found cold, dead in Mexico.
Ginsberg was off to Europe, Snyder in Japan,
the Beats gone, all gone.
We'd missed the party but didn't know it[...]

Like the Beat poets of the 1950s and the Hiroshima poets of Japan, Fike comments on the political/corporate state and the environment. Rather than being tilted toward the threat of global annihilation, whether nuclear or environmental, Fike’s approach is one of acceptance and hopefulness. Far from being a poetry of opposition and despair, Fike’s poetry is amusing and self-mocking. He takes full advantage of hindsight and merges the past and present.

“Picture Post Card from Long Beach, 1933” demonstrates such a cultural and temporal merging. The card described in the poem shows a picture of an oilfield, with a caption comparing the field of oil wells to “a deep forest,” revealing the mindset of that time. The people who lived then felt no guilt over ruining the environment, states the speaker. They even, perhaps, thought that it was good, seeing themselves revealed in their deeds, seeing themselves as god-like:

Maybe we can do no wrong—
strip-mining good, plutonium good,
space junk just more heavenly bodies
to track from backpacks on chill desert nights,
all adjuncts of us, most favored species
this postcard proof we once revered ourselves[...]

From the vantage point of the present, Rupert Fike transforms the despair and uncertainty of the post-sixties through self-mocking, reflective tones. He expertly mixes historical fact—such as the decline of the Beat Generation—with autobiographical and imaginative departures. Lotus Buffet is a densely packed and entertaining read.

Bruce Alford is a poet who lives in Mobile.