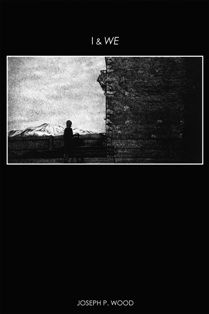 Reviewed by Alan May

In “On Jaspers Johns’ Targets,” a poem in Joseph P. Wood’s first full-length book titled I & We, Wood writes the following to describe a series of paintings by Johns:

The picket fence, the fintailed roadster,
the TV dinner, Leave it to Beaver—
these are the target’s peripheries. Dead
center is us, vanishing point, our dread

exemplified by his busy brushwork[…]

In describing Johns’ paintings, Wood also accurately describes the aims of his work: Wood frequently uses long, image-packed strokes to violently depict himself and his audience in the center of his Americana, which is not completely dissimilar to Johns’.

The poems in I & We are confessional (in the poem “I Was a Finalist,” the speaker claims he was contending “for wife ignorer of the year”); grotesque (one poem begins “If I were a lesion[…]”); and often political (see the poem titled “Supreme Court Makes Pact to Lose Virginity by the End of December 2002”). Most of these poems find firm footing in the mundane and the base (see “Middle Class Syphilis” and “The Punch”—which is literally about a punch); however, the everyday is sometimes given an almost mythic or heroic rendering. The best example of this can be found in the poem “Total: A Biography.” The speaker in this poem gives the reader the opportunity to experience his Uncle Hymie’s sciatica; Wood begins with the mundane:

daily. Calculate then the exact amount of lye
lathered into his palms beneath the faucet,

As the poem continues, the images and metaphors loom larger; to understand Hymie’s sciatica, the reader must “stare / into soup, a lunch of stones & floor sweepings // & compose a Trojan Horse blueprint[…]” The speaker further conflates the mythic with the commonplace by insisting that, to comprehend his uncle’s sciatica, we must

[…]sculpt with a rusted butter
knife the image of a grander pining: Helen

or Athena. Whittle that face down to strands
of stars. From the density of each

star’s light, guess its distance from earth,
how long it takes to arrive, & why.

In the opening poem, “In What I Have Done & What I Have Failed to Do,” Wood does a better job of describing his poetry than any reviewer could. He says,

I am the photographer
snapping The Cross submerged in my urine;
I am the doublespeak that makes this picture valid.

Why is a question whose sum-total is useful
as a cardboard junk launched down the Mississippi.
My leader urges row, row.

Wood’s humility keeps him from owning the truth this poem evokes. The “question” (his quest/poetry) may be a “cardboard junk,” but, magically, it fails to sink. It floats slowly through America’s polluted rivers and is bravely following the course its captain has set. Nov. 2011

Alan May is the author of Tracking Systems, an electronic chapbook published by Argotist Ebooks and Dead Letters (BlazeVOX Books, 2008). He is the editor of The Chapbook (a new literary annual currently in production) and APOCRYPHALTEXT.