Carolina Planters on the Alabama Frontier: The Spencer-Robeson-McKenzie Family Papers 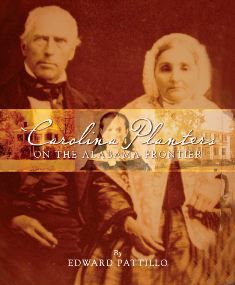 Well-known throughout the South as an art, antiquities, and estate appraiser, Edward “Eddie” Pattillo has compiled and written this impressive history of several pioneer families who made the trek from the Carolinas into early Alabama. Subtitled The Spencer-Robeson-McKenzie Family Papers, the handsomely produced book, which has been published via a grant from the Blount Foundation, contains photographs and well-organized documentation. At the heart of it is a really interesting, at times almost cinematically described narrative.

At the age of eighteen, Pattillo traveled to South Carolina to meet some of his variously surnamed relatives. The people he found there let him copy old letters from migrated kinfolk who were spoken of as having "gone West." Two would become military generals: one in the War of 1812; the other in the Confederacy.

The official book launch will be a noontime program at the Alabama Department of Archives and History on Thursday, December 8. Dec. 2012