Thirteen Loops: Race, Violence, and the Last Lynching in America 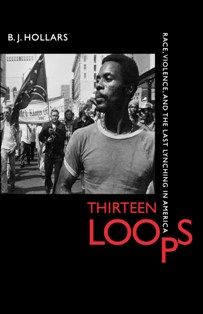 Today, I cannot walk past an oak or a camphor tree without wondering what sordid history might be tied to those branches.

B.J. Hollars shares this revelation in Thirteen Loops: Race, Violence, and the Last Lynching in America, an insightful analysis of how the residual effects of a violent racial history contributed to a 1981 lynching in Alabama.

While the major focus of the narrative is the 1981 murder of Michael Donald, Hollars explores as subtext the 1933 murder of Vaudine Maddox and the 1979 murder of Birmingham Police Sergeant Gene Ballard. When Maddox was found dead in 1933, three black men accused of her murder fell victim to a lynch mob. Two of the victims were shot and killed, and the third was seriously wounded. The evidence against them was questionable, but they were accused of assaulting a white woman, a common rallying cry in lynching cases. The power of the accusation superseded due process or reasonable doubt.

In 1979, Gene Ballard, a white police sergeant, was killed by a black bank robber, Josephus Anderson. Amid the distrust and hostilities that lingered from the Bull Connor and “Bombingham” era, the Anderson murder trial was moved to Mobile. It caught the attention of two Ku Klux Klan members, Henry Hayes and James “Tiger” Knowles, who decided to lynch a black man to protest racially integrated juries. When the two men came across Michael Donald walking alone, they murdered him and left his body in a tree across the street from Hayes’ house.

While Hollars details the action of the Klan in lynchings, he also offers a thorough examination of the role law enforcement officials played in cases of racial violence, as contributors or investigators. How were members of the Tuscaloosa lynch mob able to remove the Maddox suspects from police custody so easily? Why did it take nearly two years to arrest known Klansmen who lived across the street from the tree where Donald’s body was found hanging? Hollers explores the themes of entanglement and unraveling, fitting imagery for the interactions between police forces and black citizens.

The author uses a mosaic approach, mixing court testimony, news quotes, and original interviews to create the feeling of dialogue and scene that is most vivid in the accounts of Michael Donald’s life and final hours, told by family, friends, the investigators, the medical examiner, and one of his killers, Knowles.

Hollars mines the natural landscape to create sharp visual moments. He shows the Klan headquarters across the lake from a slave cemetery. He invokes the image of a black man killed near the golf course at the Tuscaloosa Country Club. Hollars describes walking with cemetery groundskeepers as they use shovels to locate a grave covered by overgrowth. The visual imagery parallels the themes of racial divisions and hidden truths.

The text offers a telling account of African-American sociologist W.E.B. Dubois. When he learned that the knuckles of lynching victim Sam Hose had been displayed in an Atlanta grocery store, Dubois realized that relaying lynching statistics was not enough. To combat racial violence, the factual evidence needed to be presented through the power of storytelling. Hollars does likewise with his text, offering a gripping rendition of a difficult history. Oct. 2011

Ravi Howard is a freelance writer who lives in Atlanta. He is the author of Like Trees, Walking, a fictional account of the murder of Michael Donald.