The Nine Inheritors: The Extraordinary Odyssey of a Family and Their Ancient Torah Scroll 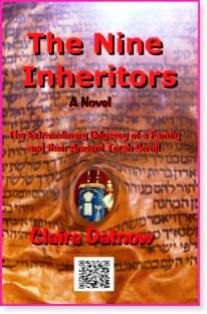 Clare Datnow’s novel, The Nine Inheritors, reads very much like a biography of ten generations as told by a keen-eyed on-the-scene observer. I enjoyed her omniscient point-of-view because I could journey with the characters as they each moved through their part of history.

Readers enter the story in 1790 Lithuania in the small village or shtetl of Valinsk. It is a place long-steeped in a caste system, where the clergy and the learned are considered superior to the tradespeople. Schmuel Rosen is a tradesman. For all his wealth, he is not high on the pecking order of the shtetl and it rankles, for he is a prideful, driven man.

Wanting desperately to rise above his station, Rosen arrives at the idea of commissioning a new Torah to lend, not give, the village synagogue or shul. For Rosen, the new Torah is not a pious act; it is a means of raising his station and that of his family. Datnow waxes very Michener-esque in her descriptions of all things Jewish, particularly the ritual involved in making a true Sefer Torah scroll—fascinating. In death, Rosen achieves his goal. He is buried in “the most prestigious part of the cemetery, on the higher ground of rabbis and scholars.” Thus begins the journey of the Rosen Torah as it passes from one generation to the next, surviving immigration across stormy seas, theft, fire, and more.

Datnow subtly but persistently uses questions in the telling of each generation’s story. The questions are asked and answered variously by each character as they inherit or come in contact with the Torah: If one does a good thing expecting personal gain, does this diminish the good thing, or is the good inherent in the good thing one did? What is the price of inheritance? When is inheritance a boon, when a burden? What is the value of holy writ in faith?

Here, the Rosen Torah is the good thing, that one holy of holies revered by the Jews and believed to be the original words spoken by God to Moses. Here we have ordinary people encountering the Torah. It is bartered, coveted, rejected, revered, and reviled as each person brings his or her own personal history to bear on the encounter.

The snake handler cannot read the Torah, but imagines it has magical powers. The KKK threatens its existence. One man’s interpretation of the Torah’s words causes him to disown his only son. The disowned son rejects any holy writ that causes his father to disown him.

I enjoyed visiting the lives in this book, while learning more than I ever knew about the evolution of Jewish life and thought. Oct. 2011

Perle Champion is a freelance writer and artist.