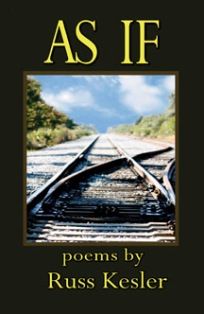 Russ Kesler’s second book is filled with poems of quiet, steady observation. This alone is pleasing. The poems move beyond attentiveness, however, and into meditation. The “as if” phrase of the title poem appears in three other poems as well, establishing a mode of approach that joins nature with tropes of nature, reality with what’s imagined, the mind with the world.

As the titles “Black Racer,” “Ghost Crab,” “Vultures,” “Osprey,” “Dragonfly,” “Live Oak,” “The Crows,” and “Sandhill Cranes” clearly imply, many of Kesler’s poems are inspired, even provoked, by the natural world. In a book divided into four sections, the first and third, especially, make use of the cycles, patterns, and hard truths of nature to better understand human life. “Some Morning” begins at dawn, with “something like / / light . . . touching / the skin of the horizon” and relays the message—to self and reader—that “Some / / morning like this / when dawn comes up / / its old indifferent self / I will have joined / / the others, body / seeking something new.”

Throughout the book, there’s a sense of calmness and acceptance of the world’s cycles, which include the death of the body but also luminous dawns that may promise something else. Still, Kesler’s voice never seems self-satisfied or smug. Struggle makes itself felt here in controlled tones, not shouts. Though these poems are often concerned with final things, the poems that deal directly with religion are hardly conventional. “The All-Powerful Hears Prayers and Sees How Thinly It Is Spread” ends “Oh god, It thinks, It’s lost control of this, / tectonic plates, tsunami, one last kiss.” “Ecce Homo” questions whether “the man” can “know what’s coming in his name, / the wars, the knives and retributions . . .” while “Three Questions” ponders the question of omnipotence, exploring the sources of both beauty and tragedy, asking an unnamed you, “Can you bob and weave, / avoiding blame?”

Such questions take on specificity in section II, with poems about family, close as well as ancestral, a father, a mother, a grandfather, a grandmother, memories from childhood. What’s striking about these poems is their lack of self-indulgence, a flaw in many contemporary poems dealing with similar subjects. The gently funny “My Mother Reports from Heaven” ends with her saying “I thought I’d miss you, but I don’t” and “Her Tropes” uses colloquial phrases—“Dog bite it / when she dropped the casserole, / / dog take it when the car ran out of gas” to evoke the colorful yet proper speech of a southern woman. The poem ends, “Oh law was the last thing she almost said.” In “At Indian Fork Cemetery” the speaker thinks about his grandfather’s legacy and whether he’s in heaven, wondering “Does that holy place / have a bed for a bigot who / also loved his grandchildren?”

The third section of the book, with poems titled “January,” “March,” and “Thanksgiving,” among others, marks seasons and passages. Domestic tranquility—“Camellias / brim a crystal bowl”—contrasts with “a sky / wiped clean of clouds” by January wind, but tellingly the speaker in this poem and others is always going outside, coming in again, reporting, reflecting, admiring, appreciating, describing.

Some of the best writing in the book is about birds:
I think the robins
relish all this wind. They jink
and veer, tail feathers

spread like sails [. . . .] (“January”)
or
“Fish eater,
how the sun burns through
your wings, how you
and your mate talk it up
up there, your
cloud-backed chatter.” (“Osprey”)

Kesler’s attentiveness carries through into the formal qualities of his poems. Adept with form—villanelles, sonnets, terza rima, and variations thereof—Kesler also works in less prescriptive but nonetheless well-built couplets, tercets, and quatrains. The star turn in this book is the beautifully woven “Thicket,” a poem, like its title, intricately wound, with four four-line stanzas in which the second and third line of each stanza rhyme and the words sparrow, sprouts, thicket, stump, sound, around, wind, leaves, nest, chance, and fence repeat hypnotically, rhyming and alliterating, in a pattern I felt I should be able to discern but could not quite. It’s a stunning piece.

For all the skill displayed in these poems, reading them is like happening upon a solitary skater on a pond in winter, one who’s not showing off for others, just practicing leaps and turns for the pleasure and beauty and engagement of the thing.

Solitaries in winter always bring to mind the work of Robert Frost, and so I turn to Kesler’s response to Frost’s “The Woodpile,” titled “My Woodpile,” in which the speaker imagines Frost’s mild disdain at someone who loaded, split, and stacked but did not actually cut his own wood; that speaker, nevertheless, feels “a certain satisfaction in looking out / the window at that order.” So, we’re not all Robert Frost, but we take our satisfaction in work well done where we can.

Though themes of mortality run throughout the book, the last section addresses it most directly with such poems as “Turning Sixty.” Looking back but also forward—as in “Poem for Tomorrow”—these poems find pleasure in “sweet rain” (“End of the Drought”) and “this air / cold enough to burn my lungs, / expansive sky layered in colors / I’ll never comprehend.” The work, the pleasure, are enough, this book seems to say, and says it well. Oct 2011

Jennifer Horne is the author of Bottle Tree: Poems and the Poetry Book Reviews Editor for First Draft Reviews Online.