To Speak This Tongue 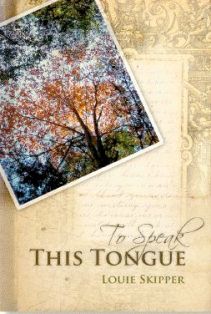 It seems most probable that the “tongue” in the title of Louie Skipper’s new collection is meant to connote language, or a way of speaking—the “tongue” of poetry. In fact, in the book’s title poem, the speaker acknowledges that he’s “planned the jailbreak of these words from within, / my scratching of ink.” Yet I couldn’t help but think, as well, of the concept of speaking in tongues—praise and consolation—as I read these lyrical and well-made poems. That religious connotation of “tongue” also seems appropriate, given that Skipper is an ordained Episcopal priest.

Indeed, many of these poems probe questions of faith and a higher order, as evinced in such titles as “Words Inhabited by Heaven, Composed by Earth” and “Praying in the Morning.” But it would be more accurate to say that the prevailing tone here is as much mystical as devout—I kept hearing echoes of Roethke as I made my way through the book. In “When I Am No Longer Able to Sleep” we have “Let me always love what pulls away, what draws me near, / wind in the apple tree restless as a soul / that has fought her way back, breaking / free of heaven.” And in “Some Time in November”:

No chickadees touched that breeze
the pines carried on.
A little fog, the plum dawn,
the brown grass:

the blessedness of a simple man, I thought.

Such poems project a profound reverence for the natural world, while implicitly acknowledging a higher power, “God who kept daydreaming of returning / to who we are and learning us completely, / trying to forget / what part of him still belonged to the moving, frozen sky” (“Asking the Rose”).

There’s also a rich narrative vein here. “The Night of Stars and Dragons” recounts a night when the speaker and his father, who was apparently a deputy sheriff, come upon “a dozen or so men // draped in white sheets” burning a cross in an African-American churchyard. When the father hits the car siren, the Ku-Kluxers scatter,

and your father pulls away without a word,
leaving you to lean again into the layers above

where black sinews of emptiness
latch to the white bones of constellations, shapes

that surrender us like the colored cemetery,
or the last attempt of the departed to communicate their
farewells.

That echoing of racial tension in the “black sinews” and “white bones” is typical of Skipper’s methods in the book, a need to draw together disparate threads and make new uses of them as the poems progress, an inclusiveness that rarely oversteps or feels heavy-handed.

And over everything here hovers the shadow of mortality: the death of a “you,” apparently the speaker’s wife, “The Death of a Friendly Cop in My Childhood,” “a boy / who kept drowning his mother in dreams,” “the faces of the dead // laid out on silk pillows.” Yet such ruminations, rather than seeming morbid, are tempered by acceptance, more than resignation. Here’s how “Eulogy on Behalf of Myself” ends:

So throw a few words over me
then go away.
Nothing means much beyond the turn blood takes
down its darkened hall.
When the word came, did you too not say,
Could you ever hope to meet a sweeter guy?

Chipper, that, even jaunty, in the face of finality. To Speak This Tongue is unflinching that way.