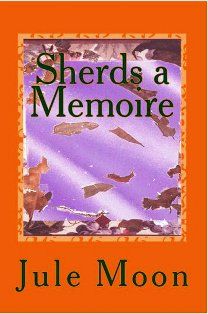 Virginia Woolf in “A Room of One’s Own” noted the historical absence of women telling the stories of their own lives. Women’s stories—if mentioned at all—were told sketchily by others. Initially inspired to gather fragments of her own life story for the anthology Writing Mobile Bay: The Hurricane Project, Jule Moon continued to work with and be inspired by other writers in the Fairhope, Alabama, area. The result is a pleasing, artful patchwork of memories, poems, short stories, and vignettes that capture some of the moments of what it was like to live a life as a twentieth century American woman in the American South.

Jule Moon’s words prove the old adage that there is no such thing as a typical woman. Born in Atlanta, Moon grew up in Mobile; traveled frequently to Camden, South Carolina, to visit relatives; graduated from the University of Alabama; and lived in Oklahoma, Texas, and Kentucky before returning to the South Alabama region later in life to retire in Fairhope. Along the way, as the years pass by, we see Moon’s life influenced by the times in which she lives. She comes of age in The Great Depression, becomes a war bride during the era of World War II, and is among the first wave of women to seek advanced degrees. In the book we learn that before she left home, her father predicted she would never have to work outside of the home, but twentieth century America had another story in store for Jule’s life. At each turn in her life, she meets the challenges with energy, hope, and a positive attitude, even when the problems seem daunting and insurmountable. Among the first wave of psychiatric social workers, Moon soon discovers that the staff with whom she finds herself working does not understand this new way of treating patients. She uses her early experience in theatre to create a series of skits to demonstrate with humor the fallacies of the old way of doing things while simultaneously showing the positive possibilities of the new way.

Like most people, Moon’s life has been brushed by names easily recognized. There is a beautiful reminiscence of attending a party where a very young Eugene Walter is his usual, entertaining self. And Moon’s father recalls the memorable Levi Strauss. Moon, toward the end of the book, recognizes that hers has been a life primarily of the twentieth century, but she seems charmed by the twenty-first as well. Her story about fleeing the coast at the threat of a hurricane—told from her dog’s point-of-view—certainly rings true for what the start of the century has dished up so far.

The proliferation of grass-roots writing projects, many focusing on areas hard hit by natural disasters such as tornadoes and hurricanes, has had at least two good results. Writing is therapeutic for the victims. But in my mind, the greater treasure is that we readers gain the honest voices of those who have been in the experience and are willing to record it for history. Jule Moon has the honest voice of a woman who has seen what life has had to offer so far and who has chosen to meet the challenges with grace and amusement. Sept. 2011