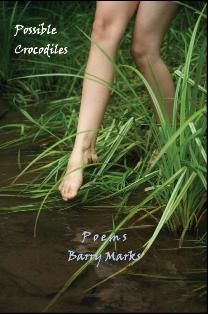 Barry Marks’ Possible Crocodiles, winner of the 2010 Alabama State Poetry Society book of the year award, is remarkable as a living document of a man engaged in the quiet heroics and failures of life on earth. Marks doesn’t seem concerned with issues of craft or artificial manipulations of language for the sake of Poetry with a capitol P. His work speaks to a genuine struggle in the face of emblematic twenty-first century ordeals: a computer virus, a tedious wedding guest, a holiday meal with family, the body as depreciating real estate, returning to the dating scene, loving and mourning a lost daughter, doing the dishes, and the impossibly shifting dynamics of human love, connection, and communication.

You won’t find sonnets and ghazals in Possible Crocodiles, though it would be fun to see what Marks would do with more formal challenges. His agenda isn’t about poetry or its history; it’s about an individual experience and an urgency to articulate that experience. It’s mostly about his self: his projected self, his authentic self, his self in relation to women, to God, to work, to family, to community. For Marks this is a conscious endeavor as he recognizes in the poem “Else,”

Myself, I am still here, myself
selfishly refusing to go,
to be part of anything else.

This poem also features one of the collection’s more tender and heartbreaking moments:

What shall I do with this knowledge?
Explore whether the frog becomes part
of the hawk that eats the snake?
Declare that memory is richer
for the children it consumes?

These poems travel a perilous journey into the nether regions of the man in the mirror, the man on the page. There’s humor, despair, ambivalence, lust, frustration, tenderness, anger, daily resignation, and spiritual resilience. There’s a wry recognition that all things are possible—even crocodiles—that life is fraught with peril even in its most innocuous moments. Throughout Possible Crocodiles, as exemplified in poems like “Elegy” and “Lay Lake,” Marks reflects upon a common existence enrobed in mystery, laden with precious responsibility, suffering from failure, relishing the ordinary along with the extraordinary, leaning—as man inevitably does—toward vanity, and rising toward God.

That Barry Marks is a thoughtful man is evident. But his poems simultaneously reveal a willingness to be fully a man, wrong in all the ways humanity is wrong: unable to teach the angels to dance, unwilling to waste another moment at a wedding reception, eager to take off the wedding band, longing to bed exotic women he meets on international flights. His poems find humor in the ordinary foibles and little dramas of quotidian despair, or deluded delight. They call him out, egg him on, prop him up, and whisper in his ear. At his best, Marks takes us with him into laughter, mystery, self-doubt, self-effacement, self-loathing, self-congratulation and the trials and tribulations of a man— like any other man (for the most part)—but with an uncanny willingness to let it all hang out, boxers or briefs. He’s not circumspect or cautious in his observations. His speakers can be downright offensive, maybe sexist, as in the male fantasy poem “Take Your Clothes Off,” which begins:

I saw you at the airport
and you smiled at me.
I think I might like you,
so take your clothes off.

But Marks’ writing can also take on fabulist guises lashing out at life’s unconquerable incongruities. Take, for instance, the last stanza of “Muse”:

And Wind, who had no god,
laughed in its empty heart and blew joyfully
in daylight and darkness,
over sea and sand,
through everything,
making only music.

There is reverence and irreverence in Barry Marks’ Possible Crocodiles, and in that cosmic blend there certainly are crocodiles. Don’t go to Barry Marks’ text for answers, or romanticized accounts of the happy life of the suburban, upper-class, highly-educated American male. Wade in with a pair of safety goggles and a shot of good bourbon because Marks wants to talk about Being (with a big B), and it isn’t always pretty, or pleasant, or poetic. It is, as he eloquently observes in “Little Soul,” the collection’s final poem, a “heavy load / Sodden with life.” Sept. 2011

Melissa Dickson is the author of Cameo from New Plains Press. Her work is forthcoming in North American Review, Sense, and the anthology Chinaberries and Crows from Solomon and George Publishers.