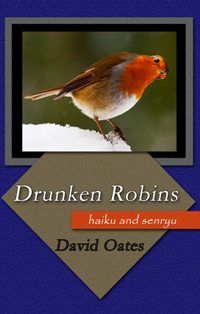 Drunken Robins is a new collection of haiku and senryu from poet David Oates, collected over the last twenty years of living in rural Appalachia and Athens, Georgia, where Oates is a teacher and public radio host. By his own account, Oates's work adheres to the philosophy of the poet Basho in that he tries to write, not as if he were in medieval Japan, but rather drawing inspiration from nature and the life that surrounds him.

Haiku and senryu are deceptively complex Japanese forms, owing both their gracefulness and impact to their brevity. The economy of words that governs the forms demands a reductive discipline which forces the poet to strip away everything but the most precious morsel of truth.

Governed by nature imagery, haiku seek immediacy, focus, musicality, and a balance of nature and humanity; the syllable count is, on average, seventeen syllables. That said, novices to the form soon learn that syllable count is not a rigid guideline, but rather a suggestion. Should the syllable count become an obstacle in the poem's journey, then it must be altered or abandoned altogether in the haiku's best interest. Oates's understanding of this truth is evidenced by the following haiku:

Oates maintains the seventeen syllable count, but rather than the standard 5/7/5 pattern, he instead renders the poem in a 6/5/6 syllable count. This haiku offers an excellent juxtaposition of the human and natural worlds. Oates's haiku, however, do not always adhere to the form's regulations. The use of anthropomorphism is frowned upon by most practitioners of the form, arguing that such devices seem affected by modern standards. Oates transgresses this restriction in a few of his haiku, like the following example:

something walking
down my ear
milkweed seed

Although the effect defies the formal rules of haiku, the poem is nonetheless pleasing and offers the reader the surprise that is so important to a strong haiku.

Former Poet Laureate Billy Collins once likened reading a haiku to consuming a small, perfect grape. The sweetness and brevity of the haiku contained in Drunken Robins carry the same opulence of crushing the metaphorical grape between your teeth, its sweetness spilling across the your tongue. Consider the haiku from which the collection derives its title:

In addition to haiku, Drunken Robins includes a number of poems in the senryu form. Similar to the haiku in brevity and structure, typically no longer than three lines, the senryu focuses on human nature. The form, named for the Japanese poet Karai Senryu (1718-90), is most often satirical, humorous, and perhaps a bit cynical. Oates's senryu outnumber his haiku, and also constitute the strongest work in this collection. The effect ranges from the surprising:

son and granddaughter
sing "Happy Birthday" on phone
like him, tone deaf

just shaved off his beard—
how long until he stops
shampooing his face?

to the heartbreakingly poignant:

from the nearby hillside
watching football practice
teenaged dwarf

Drunken Robins is a delightful collection from a skilled practitioner of the Japanese forms. Oates does not always follow the rules, but the poet's adherence to the spirit of the form rather than the rules makes his work perfect examples of the forms. Oates's latest offering is a wonderful collection of poems, ideal for fans of haiku and senryu or for those who might be new to Japanese form poetry. Sept. 2011

Allen Berry is the founder of the Limestone Dust Poetry Festival, and is currently a student at the Center for Writers at the University of Southern Mississippi.