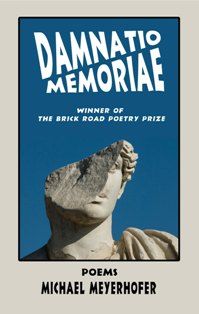 Crack the lid on the melting pot of contemporary poetry and you’ll find no shortage of poets trying to do what Michael Meyerhofer does effortlessly in Damnatio Memoriae, his third full-length book. Many of the poems in the Brick Road Poetry Prize-winning volume are the kind of imaginative feats of cleverness that Amy Gerstler has perfected. This good-natured weaving of tragicomic autobiography, obscure history, and imaginative dives down the what if rabbit hole is the sort of stuff that’s easy to like but not so easy to pull off.

Meyerhofer’s version of this often starts with a strange news headline or an improv comedy-type premise—like What if rocket scientists had us all fooled and their jobs really aren’t that difficult—and then takes off into the vapors. The poem “The Secret Lives of Rocket Scientists” is genuinely funny in its depiction of a van-full of horn-rimmed scientists as party animals, with a bartender even shouting at the joint-passing physicists to “get a real job.”

Meyerhofer’s poems in this vein (like Gerstler) successfully wring out hearty moments of poignancy from the farce, but Damnatio Memoriae’s handful of overtly autobiographical poems are the book’s emotional anchor. It is in these poems that a more straight-faced speaker comes down from the cleverness trapeze to voice earnest, well-crafted, and unadorned meditations on memory. In one such poem, the terrific “Dedication,” the speaker pivots from what sounds at first like a casual poem about childhood and creates a poem about how curious language can be as it informs memory, and vice-versa:

In our house, not once did we hear
someone say you're welcome
in answer to thanks. Instead—it’s all right,
backhanded reminder of the sacrifice
this or that Dollar Store trinket
cost folks well below the poverty line.
This is a hard habit to break.

The speaker realizes he repeats this chunk of language all the time, to students and to friends whom he’s helped move, and muses

Meyerhofer’s poems are like this. They’re two objects at once. “Dedication” seems like an ain’t-it-grand-just-being-alive poem because it is one. At least, that’s where it ends up. The featured player, though, is language and its stickiness. The clause "It's all right" has that personal resonance for the poet that we all have for certain turns of phrase which, when heard, pull us into a Proustian vortex of memory. "Dedication" gives us a tour of the vortex with nonchalance where one might expect wistfulness—the sort of surprising pirouette that typifies the book and the poet.

At one hundred pages, Damnatio Memoriae is a kind of grand tour of what it’s like to walk around Earth as a poet in the twenty-first century. The book feels its length, a little, toward the end, but its best moments are satisfying and funny, allowing us to glimpse minor, characteristically male humiliations—the author being told someone’s abusive boyfriend can “take” him in a fight, the author catching a whiff of an attractive woman in a bar who “wants nothing to do with” him—and are drawn into serious poems about a less-than-idyllic childhood and a mother whose death preoccupies the poet, who doesn't dwell on the subject for long.

Witnessing Meyerhofer manage two poetic impulses, the impulse to write a funny poem and the impulse not to, builds into a pleasant experience. The book's length allows the reader to become accustomed to the tension, as the poet has. Should one entertain the dinner party with witty banter, or should one risk bringing the room down with the story of one’s mother’s death? Like many of us, Meyerhofer prefers to do the former but also can’t help doing the latter. The resulting poems make us thankful for the dilemma. Sept. 2011