Behind the Walled Garden of Apartheid: Growing Up White in Segregated South Africa 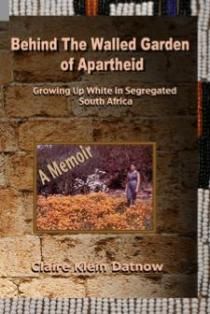 To say that growing up in South Africa in the 1950s and 1960s was like growing up in the segregated American South would be preposterous. Yet, there were parallels in the two cultures based on unapologetic white domination of subjugated black people.

Perhaps the most striking thing about Claire Klein Datnow’s memoir is the isolation of the whites in both cultures. If you have no contact with the have-nots, then you have no mechanism for empathy, for compassion, for guilt.

Of course, a decided difference in South Africa and the American South is the fact that the blacks in Africa greatly outnumbered the ruling whites, creating an ever-present fear of revolution with many of those whites.

Datnow grew up not only with the isolation of whites from blacks, but also from other subcultures in South Africa. As a Jewish family, there was a certain amount of deliberate self-imposed isolation from non-Jews. She recalls a family squabble erupting when a daughter has a date with a Gentile boy.

And there was a third form of isolationism at work in her childhood. Her family, like many other European settlers in South Africa, felt their commonality was with Great Britain not the Afrikaners who controlled the country. Although her father had what we could easily consider racist tendencies—he believed all blacks were thieves, for example—other family members were often appalled at the brutality of many Afrikaner laws and policies.

All of these dynamics make for interesting reading. Datnow, who moved to the United States in 1965, has fleshed out her memoir with historical research of events and people she did not understand as a child:

I did not know or comprehend the names of these laws, but our lives were governed by them: the races—whites and non-whites, Asians and those of mixed race—were forced to live separately, attend separate schools, use separate transportation, hotels, library, cinemas and public restrooms. My friends and I, secure in the fact that we were undoubtedly white, even joked about being classified according to race, too young to realize how classification as ‘nonwhite’ could adversely affect people for the rest of their lives….I absorbed the prejudices of the society without examining them. As a member of the privileged white race I could take my pick of neighborhoods, schools, colleges and restaurants.

That, perhaps, is not too far removed, from growing up white in Alabama or Mississippi.

Obviously, Datnow’s consciousness was raised over time. “…even as a child, I felt something was wrong, though I could not yet articulate my thoughts on the subject,” she writes. The statement is likely a reflection on the thinking shared by Southern liberals.

On a return visit to her homeland, she reflects on the monumental changes that have taken place since her childhood. Not only blacks now running the country but also “the white, they must now learn to take their places as a tiny, white minority with ever diminishing power and status, on a black man’s continent.”

While the politics and sociology obviously dominate a narrative of this type, Datnow brings a descriptive hand to everyday life in South Africa. She is particularly adept at describing school life and all things floral, especially gardens. Sept. 2011

Bill Plott is a freelance writer and journalist in Montevallo.