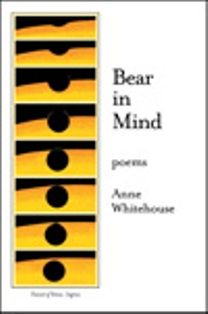 Down the left side of the front cover of Anne Whitehouse’s book Bear In Mind is a black, orange, and yellow strip of artwork titled “Transit of Venus: Ingress.” Down the right side of the back cover is the reverse image “Transit of Venus: Egress.” At first glance, one might wonder what, exactly, is the significance of this particular choice of artwork. And one might wonder exactly what one is supposed to “bear in mind.” However, within the pages of this book, one might find more questions than answers, as well as poetry that will make one momentarily forget their original questions.

Beginning with the title of the first poem “Choices Apprehend You,” one is confronted with a conundrum both by the word order that seems to personify “choices” and by the use of the word “apprehend” the first definition of which is “to become aware of” and the second “to grasp mentally” or “to understand.” Superficially, in this configuration, it would seem that the choices themselves are becoming aware or understanding, rather than the person making those choices. Within the poem, Whitehouse addresses the issue of self-image by invoking the martyrdom of Saint Sebastian, a Christian ordered executed by the Emperor Diocletian for speaking his mind. St. Sebastian’s execution by archers stands in contrast to “the betrayals that stick to you like knives,” those demands placed on a woman by her society. There is irony in the fact that St. Sebastian was prayed to by pin-makers and archers, just as a woman might seek guidance from fashion magazines and fashion television, those purveyors of the “slings and arrows” that prick the woman who disdains them, even in her solitude before her mirror contemplating her own “bare bodkin.”

This recognition of the opposing forces at work within the psyche, the “co-existence of beauty and ugliness” is expressed in the poem “The Beyond.” In this poem, snow contrasts with the black dirt into which it melts, and winter brings memories that “scorch.” However, the most striking image is that of a bronze statue of Shinran Shonin, founder of Shin Buddhism. Ironically, the statue was sent “to symbolize lasting hope for world peace” from Hiroshima, the first city in history to be destroyed by a nuclear weapon, to New York, where the bomb that consumed it was “conceived.” Imagery such as this, coupled with the description of the “dust” from the collapse of the Twin Towers as “graves in the air” burn afterimages that linger in the mind like the mushroom cloud of a nuclear explosion.

While destruction may be a recurring theme throughout Bear In Mind, so too are creation, reconciliation, and recreation. Even a battlefield like a fire escape landing, beset by the elements, passersby, and a drunken upstairs neighbor, inspires a garden of “basil ...coriander, silvery sage and flat-leafed parsley…” some of the herbs from which the patient gardener can “harvest (them) leaf by leaf” like a mantra of hope, an “Herbal” remedy.

The cyclical nature of time is at the heart of poems like “Remembering Last Summer” and “Livy’s Horses” which catalogue those things that must be forfeited and those that can be saved. “At the Winter Solstice” deftly chronicles the end of a love affair, while “Lost and Found” recounts the magic of finding a lost, loved object, and the reunion in which the heavy object is discovered to be “no burden at all” when restored to the “fragile earlobes.”

Woven through these narratives are the simple joys and fears of motherhood, as in “Mother and Child,” where Whitehouse writes, “I fix you on this page…” only to realize in “Claire in A Swing” that her daughter hangs “as if suspended from heaven on a tether.” Finally, we encounter the title poem “Bear in Mind” and we discover in part V, “June 8, 2004,” why we were presented with the “Transit of Venus” on the cover—because, as astronomers use it to judge the distance of the Earth from the Sun, Anne Whitehouse has used the events that she has “fixed on the page” to judge her distance from the sun of her own creation. Sept. 2011

P.T. Paul, B.A., M.A., is president of the Pensters Writing Group and writes both poetry and prose. Her first book, To Live & Write in Dixie, is available from Negative Capability Press.