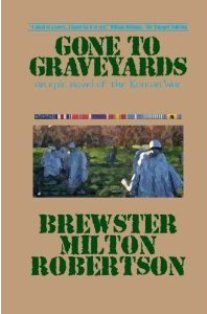 From the publisher: Gone to Graveyards, an epic novel of the Korean War, has an immediate relevance today, over a half-century after the Korean truce was signed. Incredibly the daily headlines portend the ominous threat of North Korea’s nuclear ambition while UN troops still anxiously patrol the Demilitarized Zone at the 38th Parallel. Pundits have variously called the Korean War "a black hole of history" and "The Forgotten War." Most of the meager legacy of written history about the so-called “Forgotten War” would have current and future generations believe the Korean War began on June 25, 1950, when the North Koreans crossed the 38th Parallel into Seoul and ended slightly over one year later on July 10, 1951, the date both sides sat down at negotiating tables at Panmunjom, a village a few miles north of Seoul. This is the farthest thing from the truth.

During the ensuing two years of bickering between the negotiators before the truce was finally signed on July 27, 1953, the bitter and bloody fighting continued to rage—literally within a day’s march of the truce tents themselves—on meaningless land features nicknamed Old Baldy, Pork Chop Hill, Whitehorse Mountain, Bloody Ridge, Iron Triangle, Heartbreak Ridge, et. al., with a mind-boggling total loss of life and limb to over 400,000 American and UN soldiers and an estimated 1,200,000 of the North Korean and Chinese, as well.

In much the same way James Jones’ Pulitzer Prize-winning novel, From Here to Eternity, describing the workaday existence of soldiers at Schofield Barracks in Hawaii during the days leading up to the Japanese attack on Pearl Harbor in 1941, and Denis Johnson’s National Book Award-winning Tree of Smoke, describing the surreal quality of life in the combat zone, became definitive novels of World War II and Vietnam, the narrative arc of Gone to Graveyards begins with the North Korean invasion of Seoul—six weeks before the marriage of an ill-starred pair of young, southern, middle-class American sweethearts: Collier Boyd Ramsay, an aspiring artist, and Emma Lowell, a honors-graduate registered nurse—and follows the day-to-day effect this demoralizing conflict had on their lives, continuing a full five months beyond the signing of the truce on July 27, 1953, through Operation Big Switch, and on into mid-December 1953. Bittersweet young love, youthful dreams shattered by war, wartime promiscuity and betrayal, heart-clenching human suffering, inspiring heroism, and long-kept-secret atrocities eclipsing the outrage of the Vietnam massacres at My Lai and My Khe, Gone to Graveyards offers up the foibles of this educated, but relatively unsophisticated couple as a metaphor for a racially-segregated, socially-oppressive workaday American society, examining under the burning glass, the soul-scarring psychological and physical toll the carnage of this shameful war exacted upon a world still quaking under the shadow of mushroom clouds—delivering after a half-century clouded in obscurity, the all-encompassing history of the Korean War. August 2011