After the Tornadoes: Reflections for Recovery 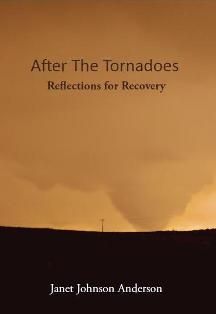 This collection of some 160 pages by Janet Anderson, a Huntsville poet, was compiled in response to the tornadoes that hit Alabama on April 27, 2011. The book features black-and-white photographs of the tornadoes and their aftermath and poems related both directly to the tornadoes and more generally to themes of loss, grief, resilience, and recovery, often from a religious perspective. This book is available for purchase at all Books-A-Million locations, with profits going to disaster relief organizations at work in Alabama.

In materials received from the publisher, the author states, “Beyond all the statistics and facts of Alabama’s worst storms, I thought about what sustains us during fearful times of crisis, and know the first thing we need to do is own and embrace our feelings” and that she hopes her book “will lend a poetic voice to and on behalf of victims of the April tornado outbreak as they deal with loss and rebuilding” as well as helping to raise funds for storm victims. August 2011