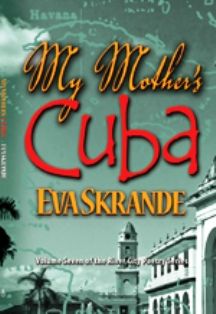 If you think of the flight of a butterfly—unpredictable, jinking and dodging, lighting for a moment then off again into the ether—you will have an apt metaphor for the movement of imagery and story and sound in the poems in Eva Skrande’s My Mother’s Cuba. Don’t look for the personal narrative or the political polemic, but expect instead the ethereal lyric, poems that pay homage to the sublime.

Here, for instance, is “The Sheep”:

When it is evening and the sheep knock at the door,
I know you are near,
that you have jumped out of the corn
to read the century and her seven grains.
O river, your scent and I collapse in the Braille
of evening’s husks.
You undo my wooden heart with your mountains.
Gentle barn that drinks my hair,
that laps at my toes like the voices of brides.
O lips that reign gently over fire and night.
Cities of midwives and wheat
rise from our fields to save what is innocent
among baskets filled with the hollows of history.

Many things here are mysterious: how and why sheep would “knock at the door,” what the “seven grains” of “the century” might be, how a barn might be said to drink hair, and so on. In its unexpected shifts in direction and the way it tends toward the ecstatic, this poem is a good example of the work contained in this collection, and we learn early to allay any temptation to read literally. Instead, we can marvel at the freshness and variety of metaphor that is present, and the rich catalogue of sensory detail, however dreamily employed.

And no matter how whimsical the tone, in poem after poem we encounter subtle allusions to history, whether personal, as the book’s title suggests, or collective. “Church” begins with Skrande’s characteristic light touch: “Within your arches, I am moon and corn. / Church where winter crows, church of souls / that wear shoes, church of birds playing hopscotch.” Later though, the allusions darken, to “solitudes” that “kneel like lost soldiers / and ask to forget the mothers whose hay carts bled,” that “ask, and are granted, shoes / that have known neither hunger nor death.” Similarly, “The Mason Party” comes to an unexpectedly somber conclusion:

The seamstress who dresses the echoes
with nothing to wear
arrived behind the plowman
who revives the fields of fire
on the tongues of the pomegranates.
The mason of love was there too—
the one who loves with the horse’s fury—
the one whose mane falls gently
over the bruised lips of a warring earth.

There’s an inherent risk in a poetry that so consistently uses elaborate metaphor as the tightrope between whimsy and rapture, and it might be said that at times these poems strain the reader’s patience by employing metaphors that simply work too hard. In “The Bicycles” we have “bicycles that were excommunicated // for letting the wind blow the bibles of their virginity.” Bicycles + wind + bibles + virginity results in what for me is humor that seems out of place. And in “Seven Directions,” we encounter “the wolves exiled just east of your hair’s allegories / and the western corner of your shoulder / where birds came with their sirens to celebrate / our corn’s anniversary.” A bit tangled, that last, but for the most part Skrande reins in that impulse toward overly ornate tropes.

No one could accuse this book of being predictable. The poems consistently arrive at unexpected places, and in musical and moving ways. Especially for readers weary of the personal narrative poem, this is the book for you. July 2011

Russ Kesler's second collection of poems, As If, is just out from Wind Publications.