Things Come On {an amneoir} 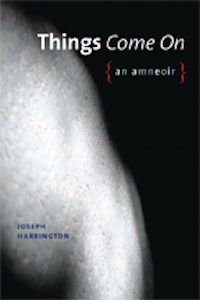 Memory is the velocity of a Self formulated in the cracked mirror of art. Joseph Harrington’s masterful new book, Things Come On, is more than an amnesiac memoir, the “{amneoir}” of its subtitle. Indeed, this text is more than a radically-conceived biography in which the personal and the political are fused in Harrington’s mother’s death from breast cancer and his parallel study of the concomitant disintegration of the Nixon administration. Things Come On is, indeed, a new form of epistemology, a fearless crossing of the fold between narrativity and knowledge.

The project is, at once, necessary and impossible: to dream a Truth from the fragmentary evidence of a life lost amid the suffering of a polity ensnared in its own bumbling narcissism and a family history encoded in the dissolution of a doomed body. Harrington’s toolkit is an astonishing density of materials: patient notations, impatient scribblings, photographs, letters, hospital records, public records, newspaper clippings, Senate Judiciary Committee testimony, visions, revisions, divisions, incisions, excisions, redactions, conspiracy theory, psycho-babble, political double-speak, medico-pharmacological cant, desperate day-dreaming, incantation, manic lists, grim wordplay, all manner of trans-textual interpellation, documentary interpolation, charts, diagrams, graphic rhizomes, and the 18.5-minute gap in the Nixon tapes.

As the language of political flummery metastasizes into the semantics of personal identity, the problem of Truth in the body politic becomes a stylized problem of Meaning in the body. In a dark burlesque of the Watergate Hearings, Harrington imagines himself under questioning:

Q: So, you would have been ten when your mother was diagnosed?
What did you know, and when did you know it? [...]

“I did know absolutely nothing.”

And in Harrington’s daring, syncretic deployment of images against the shifting veracity of “facts,” there emerges a formally complex but entirely persuasive map of the space between love and despair. This is also that space between disclosure and deception, public and private, symptom and illness, logic and intuition, acceptance and denial, penance and absolution, Them and Us, the fixed and the broken. And yet Harrington quite gallantly refuses to surrender his aesthetic principles or to claim the provisional countenance of earnest introspection: he writes it with conviction:

history becomes fate when
it's over with

no more disjunct
than this world

A gateway timeout occurred
The server / is unreachable […]

[…] A space
is a character too

One remembers that, if not what

The space is more historical
than the stars.

Things Come On is perhaps most essentially a book about the metaphysical shelters we must construct for ourselves, often with damaged parts and stolen, mismatched pieces. This brave and beautiful book assures us that these improvisations of not-forgetting may hold together just long enough for us to figure out what happened then and what happens next. June 2011

Scott Wilkerson is the author of a book of poems, Threading Stone, and teaches in the English Department at Columbus State University.