Pain Diary: Working Methadone & the Life & Times of the Man 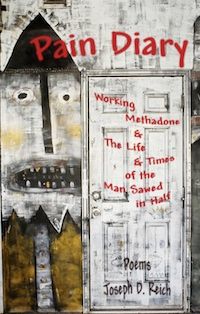 Joseph D. Reich's latest work, Pain Diary, is ambitious both in length and in style. The book consists of two lengthy poems each roughly as long as T.S. Eliot’s “The Wasteland,” which draw on Reich’s time working with recovering drug addicts and the purportedly Kerouacian experiences of his time on the road.

Perhaps the best way to approach Pain Diary, whose unwieldy title is Pain Diary: Working Methadone and the Life and Times of the Man Sawed in Half, is to approach the two poems as separate entities. The story opens at a methadone clinic in New Bedford, the city from which Moby Dick author Herman Melville’s protagonist Ishmael set forth to sea. The voices are those of the author and the patients he sees on a daily basis, which accounts for the dissonance of the chorus.

Some of the voices stand out, like the speaker in “Mail Call” who states, “What I have to be thankful for is a wife who / everytime around this hour turns our home / into a pagoda of eclectic smells and aromas.” The voice of “Rough Days You Feel Alive,” who testifies “i fell like jesus christ with all da tings / been gon through reachin jus gett’n fyed,” is easily distinguished because it borders on offensive. Save for these and the one or two occasions where Reich inserts himself into the work, such as in “Proof of Being There,” most of the voices are barely distinguishable from one another.

Working Methadone seems to be more fabricated than appropriated, to its detriment. As the poet inserts and abandons rhyme in an effort to create streetwise voices, he often reaches too far, and the effect comes across as spurious stagecraft. The voices, presumably based on patients, sound like clichéd stereotypes. However, there are times when the author takes his readers into inner offices of the clinic, seats them behind his desk, and introduces them to his patients. Such is the case with “Lo & Behold.” Here Reich says of the denizens of the clinic: “their only crime / that they just / wanted / to get out of / the cold and / feel warm all over.” It is these moments of unaffected honesty where Reich’s work is strongest, when he paints his characters in pure, simple hues, with no affectedness.

The second portion of the book, the histrionically titled The Life & Times of the Man Sawed in Half, takes a rather dramatic turn. Each poem titled with a timestamp, Life and Times is told in a solitary, earnest, vaguely desperate voice. The speaker expresses the painful disparity between have and have not; the distance between the insular upper-middle-class subdivisions and the gritty reality of the clinic. This inequality is beautifully illustrated in “6:15” in which the poet states “you think that any one of these kids / that you work with out at the / group home in plymouth massachussetts / have far deeper and kinder and more creative souls / than any of the devils who own homes out here.” The voices of Working Methadone serve as introduction to Life and Times, wherein the speaker comes to grips with the life he sees at the clinic and the life he leads.

Life and Times of the Man Sawed in Half expresses the frustration of a man caught between two worlds. Reich articulates the conundrum of liberal guilt in painfully honest and sympathetic terms. Caught between the comforts of home and the suffering of those he serves, the poet seeks a panacea for himself, and finds the medicine cabinet empty. There is no magic cure for the world, and what solace can be found in escape is at best a temporary measure.

Pain Diary suffers early on from the author’s attempts at a glib, affected hipness. Where it fails is in the poet’s attempt to appropriate the voices of his characters for his own purposes, rendering the work self-indulgent, even mildly offensive at times. However, the instances where the poet’s own voice comes through are more than sufficient to surpass these shortcomings. The second half is worth sitting through the first act. Despite its flaws, Pain Diary is an excruciatingly clear work that looks at lives in limbo. June 2011

Allen Berry is the founder of the Limestone Dust Poetry Festival and is currently a student at the Center for Writers at the University of Southern Mississippi.