Acrimony in a Little Corner of Academia 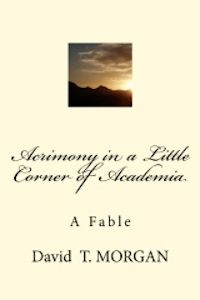 From the publisher: This is a fable* about a small public university in a little southern town—a town tucked away from the world, a little off the beaten path. In spite of the school's obscurity beyond its home state, it enjoys a fair amount of prestige within the state. There are few state citizens who have not heard of it, and many have admired and praised it. For the most part its history has been free of wrangling and controversy, but that ends when a young, articulate president takes the helm determined to enhance the school's image and elevate it to what might be called junior-Ivy-League status. After a while the college community is asking itself if this boy wonder is promoting the school or himself, and that leads to "acrimony in a little corner of academia."

*Any similarity to actual events or to any person living or dead is purely coincidental. June 2011