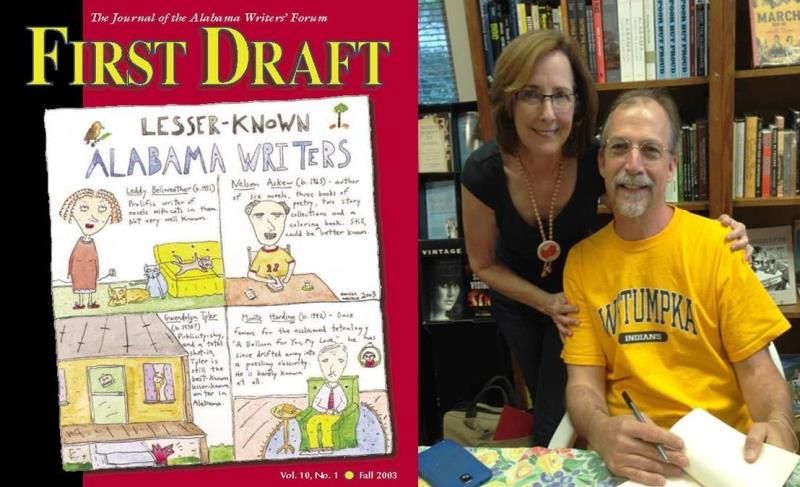 On April 25-26 in Monroeville, Alabama, writers, scholars, and readers will gather once again for the Alabama Writers Symposium. Three major awards will be given, and other seven other Alabama authors will present their works. To whet your appetite for the 2019, Harper Lee Award recipient here’s an AWF interview with Daniel Wallace.

AWF executive director Jeanie Thompson posed some questions to Wallace in preparation for his visit April 25-26 to the Alabama Writers Symposium. The symposium takes place in Monroeville, Alabama at Coastal Alabama Community College and other locations in town. To register by April 22, please call conference director Alisha Linam at (251) 575-8271 or email: alisha.linam@coastalalabama.edu

AWF: Daniel, you have created a world of fantastic, mythical characters in your fiction, but in your latest work, Extraordinary Adventures, you give us a man so ordinary that he is almost invisible. And I grew very fond of Edsel Bronfman as he metamorphosed into a truly dimensional person. Can you tell us why you wanted to write his story? Was he based on someone or was he a composite or did he simply spring from your imagination one day?

DW: He just came to me. Most stories happen that way. I’ll be sitting at the computer and write something down that sparks an idea. In this case, I wrote down his name – Edsel Bronfman. I knew him immediately.  I felt like a book about him was already written, and I just had to excavate it from wherever it was buried.

AWF: Also, for those of us old enough to remember the Edsel automobile, that name has a certain connotation or resonance (i.e. a big overblown flop of a car, right?). Want to say anything about that for the younger generation?

DW: The Edsel is one of the greatest failures in automotive history. Worse, Henry Ford named it for his son, Edsel. To be named Edsel is to start out way behind the pack, as my Edsel does.

AWF: How did your readers respond to Edsel after meeting so many of your more colorful characters? Do readers write to you and comment on the novels?

DW: I’m lucky. People don’t write me to tell me they don’t like a book I’ve written. Those who go to the trouble usually have nice things to say. No one wrote me to complain that Edsel didn’t turn into a fish.

DW: This is my first real love story, and my first truly happy ending (spoiler alert: Edsel lives). Love stories aren’t harder to write, really, but happy stories are. Edsel had to go through a lot to be happy though. The struggle is what people read for, I think, because all of us have to struggle to find our own happiness.

AWF: For someone not familiar with your novels, how would you characterize your fiction?  You have a big following from BIG FISH, but what about the other books? How would you introduce yourself to someone who had not read your books?

DW: As you noted, Extraordinary Adventures is different from the other novels, in that it’s almost entirely realistic. I would characterize the rest of my work as Magical Realism Lite.

DW: I love to draw, in part because I have no talent for it. I’ve been drawing for decades and haven’t gotten a lick better and I know I won’t get better no matter how long I do it. I’m as good as it as I ever will be and that’s a relief, because I’ve achieved all that I possibly can. I do have a talent for writing, or have worked to find my talent, and know that I could be better if I wrote more, read more, thought more deeply. There’s room for improvement, so I’m always worried that what I’m writing isn’t good enough. I write it over and over again. Finally, I have to let it go, in all its imperfection.

AWF: Can you say a little something about your home state of Alabama? You’ve lived in North Carolina for many years now, but how did growing up in Alabama influence your art – writing and visual?

DW: I imprinted on Alabama the way a baby bird imprints on its mother. Almost all of my stories take place there. Even though I’ve lived in North Carolina for almost forty years I still feel like a transplant. So its influence is total.

AWF: Fans of Big Fish would probably like to know more about how the novel has been adapted for the screen and musical theater. Many are familiar with the film, but may not realize it is still being performed in theaters around the country – In fact, it was recently performed in both Dothan and Auburn. What does its “adapted life” mean to you as a novelist?

DW: I am fond of adaptation, in life and in art. That a big group of people can get together and spend a lot of money producing something I’ve written is flattering and beyond anything I ever hoped for. It doesn’t affect my life as a novelist – day to day, I mean. I don’t write toward the idea of something of mine being adapted into something else, but it’s always a great adventure when it is. There’s a page on my website – danielwallace.org – where I’ve posted and discuss a lot of the projects that began with a story or a novel I wrote.

AWF: There is so much discussion these days about art and writing that serves a greater good – EcoPoetry, for instance. Do you feel that urge in your own writing? Does the writer have a civic duty beyond entertainment?

DW: No. If this is something that comes naturally to you as a writer, if it’s something that inspires and motivates you, then that’s what you should write. But you can’t choose your subjects; you can only discover what they are.

AWF: Would you give us a brief preview of your work or projects in progress?

DW: Briefly, it’s a nonfiction book about drugs, murder and suicide. With cartoons.

AWF: And, of course, what does it mean to receive the 2019 Harper Lee Award for Alabama’s Distinguished Writer of the Year?

DW: It’s more than an honor. I think writers can feel unseen, even when they’ve achieved some success, because so much of their lives are lived apart. Not alone or lonely, necessarily, but in their own place by themselves. It’s hard to be a writer if you don’t in some ways thrive in this separateness, but it has other consequences as well, and that’s an inescapable feeling of anonymity. A book can have a very short life. It can disappear before you know it, and part of the writer disappears with it. The Harper Lee Award is recognition in its most elemental way: I’ve been recognized, and named. I know you! I’ve been writing for what has suddenly turned into a long time.  This is wonderful, that you’ve gone out of your way now to say hello.