Alabama Writers Hall of Fame Inducts Eight on May 24 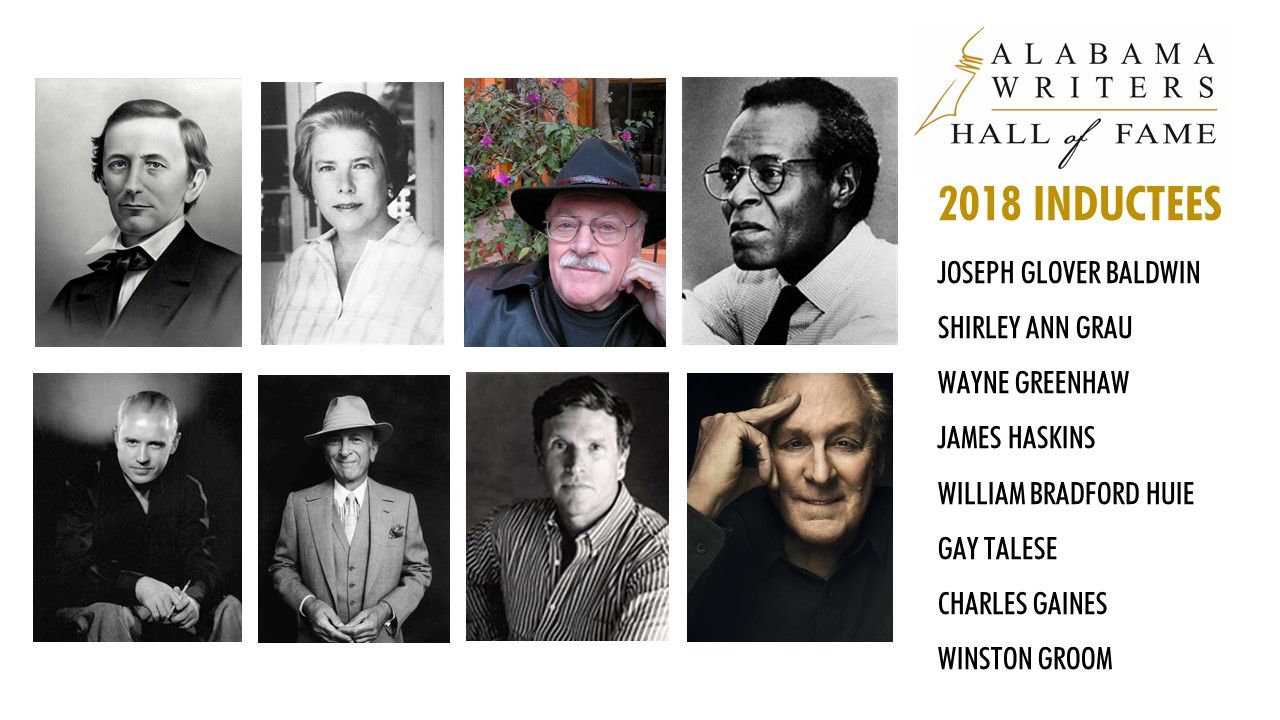 Eight distinguished authors will be inducted into the 2018 Alabama Writers Hall of Fame at The University of Alabama’s Bryant Conference Center on May 24.

A reception will be held in their honor at 6 p.m. followed by dinner at 7 p.m. The induction ceremony will immediately follow dinner.

Organizers from the Alabama Center for the Book and the Alabama Writers’ Forum, partners who created the Hall of Fame in 2014, hope to have people from across the state of Alabama in attendance to celebrate authors from their cities and counties.

“This is a gala event, with individual tickets as well as tables that can be purchased in honor of a past inductee, or to celebrate one of the incoming inductees,” said Jeanie Thompson, Alabama Writers’ Forum executive director. “Individual tickets and sponsor tables are on sale and can be purchased by contacting Emily Burnett at emburnett@ua.edu or 205-348-5543,” she said.

Groom is a UA graduate and grew up in Mobile County. He is best known for his book Forrest Gump which was adapted into a film winning six Academy Awards. He has written short stories, novels, and numerous non-fiction works on diverse subjects including the American Civil War and World War I.

Talese is a UA graduate and a native of Ocean City, New Jersey, and currently lives in New York City. A best-selling author of 15 books, Talese is well known for his magazine profiles, including “Frank Sinatra Has a Cold” published in Esquire. While a student at UA, Talese wrote for the student newspaper, The Crimson-White, serving as the sports editor for his junior and senior years.

Gaines was born in Jacksonville, Florida, and at the age of ten moved with his family to Birmingham. He received his undergraduate degree from Birmingham-Southern College. His first novel, Stay Hungry, was published in 1972 and focused on the subculture of bodybuilding during the early 1970s. The book was made into a motion picture in 1976 staring Jeff Bridges, Sally Field and Arnold Schwarzenegger (in his first film). An award-winning writer across multiple genres, Gaines has written other produced screenplays and adaptations, other fiction and numerous articles about fishing and outdoor life in magazines including Outside and Garden and Gun.

Grau was born in New Orleans, Louisiana, and lived much of her childhood in and around Montgomery and Selma. Her book, The Keepers of the House, was awarded the 1965 Pulitzer Prize for fiction. Much of her writing centers around stories about women and are often set in the Deep South. Her works include The Black Prince, nominated for the National Book Award in 1956, Evidence of Love, Nine Women and Selected Stories published in 2006.

Authors being posthumously inducted are Huie, Greenhaw, Haskins and Baldwin.

Huie, a native of Hartselle, attended UA graduating Phi Beta Kappa in 1930. Huie’s books, both fiction and non-fiction, centered around topics related to World War II and the Civil Rights Movement. His works include The Americanization of Emily adapted into a film in 1964 with the same name, The Execution of Private Slovick adapted as a television movie in 1974, and He Slew the Dreamer, written in 1970 about the assassination of Dr. Martin Luther King, Jr.

Greenhaw, born in Sheffield, moved to Tuscaloosa as a young boy. He enrolled at UA and studied under the creative writing professor Hudson Strode He is the author of 22 books, and was a journalist for The New York Times and Times. Greenhaw is known for writing about the Civil Rights Movement including Fighting the Devil in Dixie: How Civil Rights Activists Took on the Ku Klux Klan in Alabama.

Haskins, a native of Demopolis, received degrees from Georgetown University, Alabama State University, and the University of New Mexico. He wrote more than one hundred books for children and adults, many highlighting the accomplishments of African Americans. His 1977 picture book, The Cotton Club, was used as inspiration for the 1984 movie. He won numerous awards including the Coretta Scott King Award for his book The Story of Stevie Wonder in 1976 and the Alabama Library Association Award for best work for children in 1988.

Baldwin, a native of Virginia, moved to Alabama in 1836. He practiced law with his brother before being elected to the Alabama House of Representatives in 1843. While practicing law, he wrote two books of humorous stories, The Flush Times of Alabama and Mississippi: A Series of Sketches, published in 1853, and Party Leaders, published in 1854.

Groom, Talese, and Greenhaw have also been honored with the Harper Lee Award for the Distinguished Alabama Writer of the year.

The Alabama Writers Hall of Fame was founded in 2015 through a partnership between the Alabama Center for the Book, housed in the University Libraries at UA and the Alabama Writers’ Forum, a statewide literary services nonprofit located in Montgomery.

The Alabama Center for the Book, established in 2001, is an affiliate of the National Center for the Book at the Library of Congress. The Center supports reading, literacy and other book-related activities in Alabama including the national Letters About Literature reading and writing contest.

Founded in 1993 to recognize Alabama’s strong literary tradition, the Alabama Writers’ Forum facilitates the practice of literary arts through its services to writers and the general public. With individual and corporate associates, the Forum represents the diverse voices of Alabama’s contemporary writing talent as well as the readers, educators, and state leaders who appreciate them. The Forum is a partnership program of the Alabama State Council on the Arts.