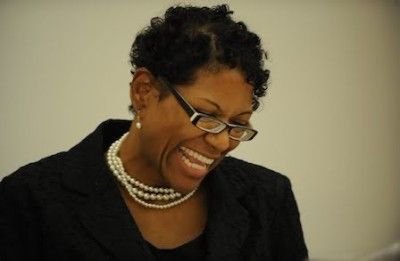 MONTGOMERY, Ala.— Award-winning poet, fiction-writer, educator and graduate of the University of Alabama’s MFA Writing program, Honorée Fanonne Jeffers has been selected to receive the Harper Lee Award for Alabama’s Distinguished Writer of the Year for 2018.

The award is made to a living, nationally recognized Alabama writer who has made a significant lifelong contribution to Alabama letters. Jeffers will receive the honor during a gala dinner at the Alabama Writers Symposium in Monroeville, Alabama, on April 19, 2018.

“I am beyond thrilled and honored to receive this prestigious award,” Jeffers said upon receiving the news. “The people and rich culture of the state of Alabama are very beloved to me, and the work of the great Harper Lee has been so essential to my growth as a writer and human being,” she said.

Her work has also appeared in a wide range of contemporary journals including Ploughshares, Crab Orchard Review, Georgetown Review, Callaloo, Iowa Review, Oxford American, Prairie Schooner, and Poetry. Her poems have been part of anthologies edited by some of the most important poets working today: Kevin Smith, Cornelius Eady, Toi Derricote, and Nikki Finney.

“Honorée Jeffers is exactly the type of writer who deserves the Harper Lee Award. She is prolific, engaged in discourse on social justice, talented, and not nearly finished,” said Dr. Jacqueline Allen Trimble, Chair of the Department of Languages and Literatures at Alabama State University. Noting Jeffers’ strong ties to the state of Alabama through education and the context and subject matter of her poetry, as well as her breadth of talent in literary genres, Dr. Trimble said Jeffers is interested in allowing those who have been voiceless to tell their stories as an integral part of American history.

Trimble quoted the publisher’s jacket blurb on The Glory Gets, Jeffers’ latest book: Jeffers “turns to the task of seeking and reconciling the blues and its three movements – identification, exploration, and resolution – with wisdom.” Trimble also commented that there is considerable anticipation for Jeffers’ current work in progress, “The Age of Phyllis,” a book-length persona poem study of Phyllis Wheatley, a woman who began both African American and African American womanist literary tradition.

Other career awards include the Emerging Fiction Fellowship from the Aspen Summer Words Conference, the Tennessee Williams’ Scholarship in Fiction from the Sewanee Writers Conference, and the Goodheart Prize for Fiction from Shenandoah: The Washington and Lee University Review. Jeffers has been awarded poetry fellowships from the American Antiquarian Society, the Bread Loaf Writers Conference, the National Endowment for the Arts, the Rona Jaffe Foundation, the Vermont Studio Center, and the Witter Bynner Foundation through the Library of Congress.

The Alabama Writers’ Forum, a statewide literary arts organization and partnership program of the Alabama State Council on the Arts, coordinates the selection of the Harper Lee Award recipient annually from nominations from the field.

To register, contact Alisha Linam at 251-575-8271 or alisha.linam@coastalalabama.edu
For more conference information, visit the website for the Alabama Writers Symposium 2018.