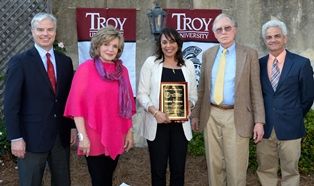 Natasha Trethewey, two-time U.S. Poet Laureate and Pulitzer Prize winner, received the Hall-Waters Prize on April 23 following the Alabama Book Festival, where she read in the South Tent before a rapt crowd of poetry fans. The Hall-Waters Prize was established by the late Wade Hall at Troy University to honor his parents Wade H. Hall Sr. and Sarah Waters Hall. It is given annually to a Southern writer by Troy University, Wade Hall's alma mater. Each recipient receives $5,000.

"I am deeply honored to receive the Hall-Waters Prize and to accept it today in memory of Wade Hall," Trethewey told the Troy University Trojan News Center. "This is the first prize for southern literature that I have ever won.

Gregg Swem, long-time partner of Wade Hall, addressed the assembled guests about Hall’s love of poetry, his history of publishing poets, and the appropriateness of Natasha Trethewey’s receiving the first award exclusively for poetry.

"Natasha Trethewey is a singular voice in American letters today," Dr. Kirk Curnutt told the Trojan News Center. "Her work is unflinching in addressing the racial realities of America past and present. Her poems and non-fiction are both informed by impeccable research while remaining accessible to general readers. More than anything, her career is a testament to the importance to taking literature to the folk. We're honored she would accept the Hall-Waters Prize and thrilled for her to appear at the Alabama Book Festival."

Trethewey read several poems from her latest work to those gathered in the courtyard of Young House in Old Alabama Town. Because of her deep connection to Alabama—where she got her literary start while teaching at Auburn University—it was particularly meaningful to her to receive the award from Troy University at the 2016 Alabama Book Festival.

Trethewey was awarded an Alabama State Council on the Arts Literature Fellowship while at Auburn University. She read from her first book in manuscript, Domestic Work, at Huntingdon University during that time.