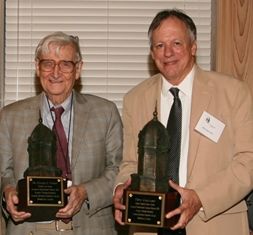 In the pouring rain, with the threat of severe thunderstorms and the possibility of tornadoes, the state’s literary faithful gathered at the Vanity Fair Golf and Tennis Club in Monroeville on March 31 to celebrate Harper Lee Award recipient E.O. Wilson and Eugene Current-Garcia Award winner Fry Gaillard during the 19th annual Alabama Writers Symposium (AWS).

“I’ve come home!” said Wilson in his acceptance speech. “I’d like to stress that while I’ve been at Harvard for sixty-five years, I’ve never left Alabama. I am not a Harvard professor who left the South. I am a southerner who went north to find work.”

The author of thirty-one books, Wilson is generally recognized as one of several leading biologists in the world. He is acknowledged as the creator of two scientific disciplines (island biogeography and sociobiology), three unifying concepts for science and the humanities jointly (biophilia, biodiversity studies, and consilience), and one major technological advance in the study of global biodiversity. He is currently Honorary Curator in Entomology and University Research Professor Emeritus, Harvard University. His most recent book is The Meaning of Human Existence (Liveright Publishing Company, 2014).

“I would like to recognize, promote, and bring into greater focus the creative arts in Alabama,” said Wilson, “especially creative writing, so that when someone hears ‘Alabama’ I want people to say, ‘Alabama, yes, writers.’”

Wilson is currently working to establish a national park in the Mobile-Tensaw River Delta and the Red Hills north of Monroeville.

The Harper Lee Award for Alabama’s Distinguished Writer of the Year, presented annually by Alabama Southern Community College at the Alabama Writers Symposium in Monroeville, is made possible through a generous grant from George F. Landegger, Chairman, Parsons & Whittemore. Recipients receive a Frank Fleming bronze of the Old Monroe County Courthouse, a setting for Harper Lee’s novel, To Kill a Mockingbird, and a cash prize. The Alabama Writers’ Forum, a statewide literary arts organization and partnership program of the Alabama State Council on the Arts, coordinates the process to select the Harper Lee Award recipient annually from nominations from the field.

Bryan Wilson, president of the Association of College English Teachers of Alabama (ACETA), introduced Gaillard, writer in residence at the University of South Alabama.

“I’m incredibly honored to receive the Eugene Current-Garcia Award,” said Gaillard. “When I think of all those past winners with their PhDs and me with my BA, I think the selection committee may have made a mistake.

“We need to keep the spirit of Monroeville alive. This place is the measure of our literary heart. With that in mind, I am proud, pleased, and humbled to accept this award.”

Given each year at the Alabama Writers Symposium, the Eugene Current-Garcia Award for Alabama’s Distinguished Literary Scholar reflects the respect of the scholar’s peers in the academic community. Annual selection of the recipient of the award is the task of ACETA, a diverse organization representing faculty at all of Alabama's two-year, four-year, and doctoral institutions. Like the Harper Lee Award, the honor is sponsored by George F. Landegger. The recipient also receives a Frank Fleming bronze and a cash prize.

The award is named for the late Dr. Eugene Current-Garcia, who, in a distinguished academic career spanning five decades, mostly at Auburn University, published six books and dozens of articles and reviews on the short story genre and Old Southwest humor. He also founded and co-edited the Southern Humanities Review.

The next day, after a morning thunderstorm, the Symposium moved to the Old Monroe County Courthouse for a round of readings and discussions and for an afternoon ceremony celebrating Marlin “Bart” Barton honored with the first Truman Capote Award for Distinguished Work in Literary Nonfiction or the Short Story by an Alabama Writer.

Introducing Barton, author and chairman of the Troy University Department of English Kirk Curnutt said, “If anyone needs recognition for writing in this state it’s Bart. He so genuinely captures the world as lived in rural Alabama. He’s attuned to the underbelly of the Black Belt region, and he creates great villains, classic rural Macbeth type characters.”

“I am honored to receive this prize named for one of Alabama's truly great writers,” said Barton after receiving the Tiffany crystal commemorating the prize. “And to be the first recipient feels especially meaningful.”

Barton is the author of three collections of short stories—the most recent Pasture Art—and two novels. His short fiction has appeared in various literary journals and in the O. Henry Award and Best American Stories yearly anthologies. He teaches in the Low Residency MFA program at Converse College, and he serves as the Alabama Writers’ Forum’s Assistant Director for Writing Our Stories, a creative writing program for adjudicated youth.

Don Noble, literary scholar, critic, and host of the TV literary talk show Bookmark, was instrumental in the creation of the Truman Capote Award. The prize is cosponsored by the Southern Literary Trail and the Alabama Center for the Book and will be awarded annually.

“A number of you know that Capote was actually born Truman Persons (he later took his step-father's name), and the Persons were a well-established Alabama family,” said Barton. “Years ago I became acquainted with a member of that family, and I asked my friend if he ever met Capote or if he'd ever heard his family talk about Capote. He smiled, said no, he'd never met him, and he said that all his grandmother would ever say about Capote was (and she said it in the most genteel, old-fashioned Southern accent): ‘He was very strange.’

“Well, what he was, was a great writer, and I'm more than honored to receive an award bearing his name.”