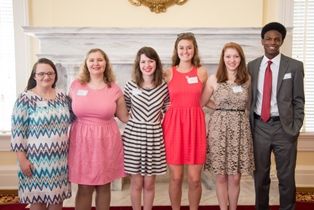 To celebrate its twenty-first year of honoring student writers, the 2016 Alabama High School Literary Arts Awards and Scholarship Competition (HSLAA) went through a bit of a metamorphosis. As the Forum moves toward online submission for all award categories, it limited this year’s competition to the Senior Portfolio Scholarship—with seven recipients—and the outstanding student literary magazines. Also new this year was a luncheon to honor the students, their families, teachers, and guests.

The event was held on March 16 in the Old Supreme Court Archives Room at the Alabama State Capitol.

After pictures with the students’ district legislators and a box lunch, Forum Executive Director Jeanie Thompson welcomed the students and their guests. “Most of these young people here today are seniors,” she said. “You’re at the point in your life where you’ll move forward, and we welcome you here today as our future literary talent.”

Thompson also recognized Anita Garner, professor of English at the University of North Alabama, who served as 2016 portfolio judge and was the originator of the contest when the Forum first began, and Dr. Jesseca Cornelson, assistant professor at Alabama State University, judge for the literary magazine competition. Thompson thanked Barbara Reed, public information director at the Alabama State Council on the Arts, who assisted with the luncheon and check-in for the event.

Al Head, Executive Director of the Alabama State Council on the Arts, also remarked on the talent of those in the room and the people who nurtured that talent.

“I would like to offer a big thank-you to you parents,” he said. “And a special thank-you to the dedicated teachers here. We have some bright students, teachers, and schools in the State that are shining examples to the nation. You all have a talent, have a skill, and as seniors you’re moving up to new and better things.”

Before the $500 cash awards for portfolios were presented, Thompson acknowledged seven individual sponsors of the awards, and urged those present to consider honoring someone who has encouraged young writers with an award in the future. She asked Ruth Ott, sponsor of the Ruth and Jay Ott Senior Portfolio Scholarship since 2006, to stand and be recognized.

The High School Literary Awards have been supported since 1994 by the Alabama State Council on the Arts, and more recently by the Support the Arts License Plate. The 2016 program lists individuals who contributed to the HSLAA in honor of the late Katherine W. Thompson (Thompson’s mother).

Winning teachers were asked if they would like to participate in a feedback session this summer to improve the submission process and other aspects of the HSLAA. News of this meeting will be posted on www.writersforum.org.