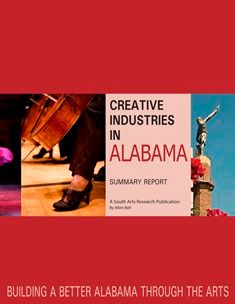 Creative Industries in Alabama: Building a Better Alabama Through the Arts, a recent report released by the Alabama State Council on the Arts (ASCA) and South Arts, a nine-state regional arts agency based in Atlanta, profiles the creative industries in Alabama as an 8.7 billion dollar economy. The report highlights an industry representing over 4,700 businesses and employing 71,000 people, earning over two billion dollars annually. The nonprofit arts and culture community is at the core of the data collected, but the report also includes the for-profit sector as part of the total industry profile.

At a press conference held on December 5, ASCA Executive Director Al Head said, “We often talk about the arts and its contribution to the state’s quality of life. Perhaps now we should not use so many adjectives and begin to use more data. We hope that public officials at all levels will look at this publication and begin to see the arts as an economic force.”

Governor Robert Bentley contributed to the study. In his introduction, he wrote, “Creative communities and creative industries are important to Alabama’s economic future and strategy for growth. Increasingly, quality of life will determine where companies decide to locate, invest, and expand business activity.”

At the press conference, ASCA Chair James Harrison III echoed the governor’s sentiment. “Quality of life is important to a business when deciding whether to invest in a community,” he said. “This publication offers prima facie evidence for industries who are deciding whether to locate in Alabama.”

Greg Canfield, Secretary of the Alabama Department of Commerce, wrote in a preface to the report, “Alabama has long recognized the importance the arts and culture play in economic development. Business officials don’t just work in a community; they want their families to have excellent quality of life in a community rich with opportunities.”

Montgomery Mayor Todd Strange went a step further at the press conference. “When you’re number four in industry, as far as employment and economic impact, then you are an economic force,” he said. “The arts in Alabama is big business. It’s important for business leaders to see the impact of the arts in their area.”

Consistent with the comments regarding opportunities, the report highlights Alabama’s creative industry resources in the areas of literature and publishing, design, film and media, heritage and museums, performing arts, and visual arts and crafts. Literature and publishing and film and media are particularly strong in Alabama with performing and visual arts also very prominent.

“It has been widely recognized nationally that the arts have a significant impact on the economy, contribute to the education of students, enhance downtown revitalization efforts, and are the backbone of cultural tourism,” said Head. “While Alabama may be known more for championship college football, NASCAR, and hunting and fishing, our cultural resources are rich, diverse, and always a pleasant surprise to visitors.”

The Council proposes that public officials, city planners, business leaders, and arts organizations use the report as part of their plans for enhancing quality of life, recruiting talent, and generally stimulating positive growth in the 21st century.

The Creative Industries in Alabama report can be accessed by visiting the State Council on the Arts website at http://www.arts.state.al.us/ . For a print version (limited copies), contact Barbara Reed at 334-242-4076, ext. 223. Based in Montgomery, the Alabama State Council on the Arts is the official state arts agency of Alabama. The fifteen-member council is appointed by the governor and reflects statewide representation.