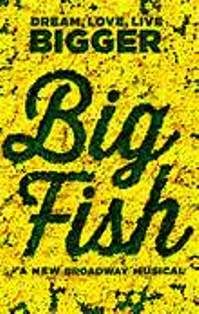 Algonquin Books released Birmingham native Daniel Wallace’s novel Big Fish in 1998, and it became a runaway success, especially in Alabama, where much of the book is set. Film director Tim Burton read the book, and his film version hit the screen in 2003. Now, some ten years later, Big Fish, the musical, arrives on Broadway.

BIG FISH centers on Edward Bloom, a traveling salesman with a huge heart, enormous spirit and an extraordinary vision of the world. Edward's incredible, larger-than-life stories thrill everyone around him─most of all his devoted wife Sandra. But their son Will, about to have a child of his own, must make his way through the smokescreen of his father’s improbably stories to unravel the mystery of who his father truly is. BIG FISH is about dreaming, loving, and living bigger.

BIG FISH is based on the 1998 novel Big Fish: A Novel of Mythic Proportions by Daniel Wallace, and the 2003 critically acclaimed film from Columbia Pictures, written by John August, directed by Tim Burton, and nominated for an Academy Award, Grammy Award, four Golden Globe Awards, and seven BAFTA Awards. BIG FISH had its pre-Broadway world premiere at Chicago’s Oriental Theatre in a critically-lauded 5-week engagement in April 2013.

Tickets for BIG FISH range from $49 to $142 and are available at the Neil Simon box office or at Ticketmaster.com (866-870-2717). The playing schedule for BIG FISH is as follows: Tuesday and Thursday at 7 p.m., Wednesday, Friday and Saturday at 8 p.m. with matinees on Wednesday and Saturday at 2 p.m. and Sunday at 3 p.m. A limited number of student rush tickets will be available when the box office opens for that day’s performance. Student rush Tickets are $27 and are only available in person at the Neil Simon box office with a valid student ID. Limit two tickets per person.

FOR INFORMATION ON BIG FISH VISIT: