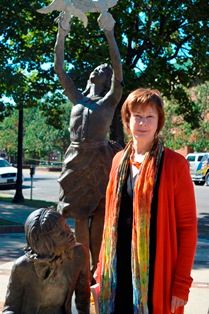 On Saturday, September 14,2013, a monument titled Four Spirits was unveiled in Kelly Ingram Park in Birmingham as part of Empowerment Week, held in commemoration of the civil rights movement and culminating in recognition of the bombing of the 16th Street Baptist Church on September 15, 1963. The memorial, positioned diagonally across the street from the church, was created through a commission with Birmingham native Elizabeth McQueen.

The City of Birmingham is commemorating the events of 1963, the historic year in civil rights history, with its Fifty Years Forward initiative.

Sena Jeter Naslund’s novel, Four Spirits inspired the monument’s title, according to Chervis Isom, a founding member of the Board of Governors of Four Spirits, Inc., the non-profit organization that raised funds to erect the monument. Isom said that after he read Carolyn Maull McKinstry’s While the World Watched, an account of being in the church on the day of the bombing, he felt called to bring together people who would make such a monument a reality. Herself a young girl at the time of the tragic incident, McKinstry wrote that there was no monument for the slain children at that time. The simple fact of her statement spurred Birmingham citizens, black and white, to action.

“The Alabama Writers’ Forum recognizes the literary connection between a Birmingham novelist and the city’s history,” said AWF Executive Director Jeanie Thompson, who attended the unveiling. “We congratulate those who saw the monument through to reality, including the City of Birmingham. To envision something in the mind and heart, and then bring it to reality in bronze for the public and all who visit Birmingham is a valiant, creative act.”

Afterwards Thompson posed a question to Naslund, “Your novel Four Spirits has provided the title for the memorial statue. What does it feel like to participate in the unveiling of Four Spirits as sculpted by Elizabeth McQueen?”

“The murder of these girls woke up the consciousness of America about racism. They became the guiding spirits for nonviolent action and the movement toward racial equality,” Naslund said. “To see a sculpture commemorating this tragic turning point was a fulfilling and meaningful event for me as a white woman who grew up in Birmingham, taught on the Miles College campus, and wrote the novel Four Spirits.”

Naslund, a best-selling novelist and Harper Lee Award recipient, lives in Louisville, Kentucky. She will launch her new novel, The Fountain of St. James Park: Or the Portrait of the Artist as an Old Woman, on Tuesday, September 18, from 4-7 p.m. at the Alabama Booksmith. Naslund addressed the Birmingham Southern College student convocation on Tuesday morning on the subject of the Birmingham civil rights era.

For complete coverage of the unveiling ceremony in Kelly Ingram Park, including background on those who conceived of the project and saw it through to completion, visitors and speaker, see Tom Gordon’s “Four Spirits unveiled across from Sixteenth Street Baptist Church” in Weld for Birmingham.