Nine Alabamians honored at Celebration of the Arts Awards 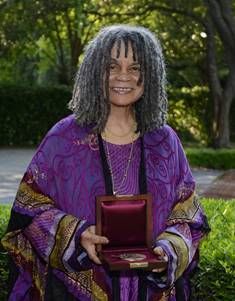 The Alabama State Council on the Arts held its biannual Celebration of the Arts Awards ceremony on Tuesday, May 21, at the Alabama Shakespeare Festival in Montgomery. The event recognizes and honors Alabama artists and individuals for their contribution to the arts in Alabama and beyond. Al Head, executive director of the Council said, "This awards program is an opportunity for the state to recognize special individuals who make the arts happen and bring great credit to our state through their work."

This year’s recipients included a Pulitzer Prize winning author, an internationally recognized poet, a professor emeritus and cultural historian, a university president and his wife, a dance instructor and artistic director, a playwright, a traditional band, a community arts volunteer and arts patron, and a long-time leader in the state legislature. Their contributions to the arts are diverse and far-reaching. Their impact on the entire state has been profound and sustained for many years.

The Council honored the following people:

Lyndra Daniel, Birmingham—The Jonnie Dee Little Lifetime Achievement Awardee has devoted her adult life to supporting excellence in the arts as a volunteer, arts patron, and community leader in the state. She served on the State Council on the Arts for eighteen years and a term as Chairman.

Rick Bragg, Piedmont—The Alabama’s Distinguished Artist Awardee is a Harper Lee Award recipient and Pulitzer Prize-winning author and journalist known for his nonfiction books, especially those on his family in Alabama. Bragg is currently a professor of writing at the University of Alabama and a regular contributor to Southern Living magazine.

Dr. Wayne Flynt, Auburn—This Governor's Arts Awardee is a masterful storyteller and an award-winning author of twelve books examining religion, civil rights, education, poverty, and politics throughout the history of Alabama. He was the inspiration and long-time editor of the Encyclopedia of Alabama. He remains Professor Emeritus at Auburn University.

Gordon & Geri Moulton, Mobile—These Governor's Arts Awardees have a passion for the arts and are avid collectors. They gathered support for numerous public art projects that include the Geri Moulton Children’s Park sculpture garden located on the grounds of the University of South Alabama Women’s Hospital. Their passion for all art forms led them to create the USA Glass Arts program and facility at the University. University President Gordon and First Lady Geri Moulton have served the University of South Alabama for the past forty-six years. President Gordon announced his retirement this year after serving in that position since 1998.

Jean Prescott Pierce, Birmingham—This Governor's Arts Awardee has spent more than half a century volunteering her time, energy, and talents to the Birmingham Children’s Theatre. BCT is recognized nationally as one of the most highly regarded theaters for young people in the country. Mrs. Pierce has written countless plays and has been instrumental in the growth of BCT.

Sonia Sanchez, Birmingham—This Governor's Arts Awardee is an internationally recognized poet. In addition to being a Harper Lee Award recipient, an American Book Award winner, and a National Book Critics Circle finalist, Sanchez has received numerous other awards for her work as a playwright, educator, and activist.

Senator J. T. “Jabo” Waggoner, Birmingham—This Special Council Legacy Awardee co-sponsored the legislation that created the Alabama School of Fine Arts in 1971 and has served the arts in the legislature and the state of Alabama for four decades. He currently serves as Senate Majority Leader.

Prior to the awards program, a special reception was held in the Patron’s Room at ASF for the award recipients, their families, and guests. First Lady Dianne Bentley offered her personal congratulations to all the recipients at the reception. Jennie Weller created a buffet of beef tenderloin, and an array of other culinary treats. Elizabeth Schaum, special events manager at ASF, created the floral arrangements for the buffet tables and lobby. A dessert reception immediately followed the ceremony for the award recipients and a statewide audience of 600 in the lobby of the theatre.

Honoree Rick Bragg was joined by his wife Dianne and Rick’s stepson, Jake Calhoun. Numerous fans of Bragg’s work attended from across the state to celebrate his latest achievement in a growing list of literary honors.

Award recipient Lyndra Daniel of Birmingham was accompanied by her husband Bill and their two sons, Zachary and Christopher, and his wife Lucy. Many former Arts Council members were on hand to congratulate Mrs. Daniel on being selected for this noted award.

The Legacy Award recipient Senator Jabo Waggoner was joined by his wife Marilyn, Mark and Susan Waggoner, Kevin and Lyn Kilpatrick, Rheana Scarborough, Sue Spears, and Andi and Mark Silberman. Past and present colleagues from the Legislature were on hand to congratulate the veteran senator.

Honoree Dr. Wayne Flynt was accompanied by his wife Dartie along with their son Sean. Special guests joining the Flynt family included Jeff and Carole Jakeman and Shirley and Kelly Thames.

Awardee Jean Prescott Pierce of Birmingham was escorted by her two sons, Stephen and Adam. Others on hand to celebrate Mrs. Pierce’s award were fellow colleagues and associates from the Birmingham Children’s Theatre included Charlotte Lane Dominick, Camille Butrus, Sandra Lawler, Ginger Sharbel, and BCT Director Jack Lemmon and his wife Beverly. Special friends from Tallahassee, Florida, Pat and Fred Harris, made the long trip to be with Jean.

Internationally known poet and Award recipient Sonia Sanchez, flying in from Philadelphia, was accompanied by her son Morani and Jeanie Thompson, executive director of the Alabama Writers’ Forum. Fans and admirers of Ms. Sanchez were on hand to congratulate her on being selected for this Alabama award.

Montgomery favorite and award recipient Kitty Seale was accompanied by her husband Turner. Later in the evening Kitty was joined by her daughter Kate Robertson and Kate’s friend, Kevin Hagerson. Other friends and family of Kitty attending included her brother and sister-in-law, Frank and Sharon Litchfield, John Seale and Patti Williams, Susan and Jeff Samuel, Jane Barganier, and Alice McCollum.

Actors from the Birmingham Children’s Theatre performed three vignettes from past BCT plays in honor of Jean Pierce.

The Poor But Proud Shape Note Singers performed in the Sacred Harp singing tradition in honor of Dr. Wayne Flynt, who also happens to be an ordained Baptist minister.

Lyndra Daniel was honored by a large ensemble of young singers/actors from Red Mountain Theatre performing “The House that I Live In,” the song Lyndra performed in the talent competition at the 1962 Miss America Pageant.

The Excelsior Band was honored with a performance by the Bay City Brass Band of Mobile, whose younger members were strongly influenced by the 130-year-old Excelsior Band.

The close of the awards event featured all the performers joining Wes Hampton on stage for the grand finale, the popular Sam Cook song “People Get Ready.”

The Celebration of the Arts Awards Gala is held every other year and is FREE and open to the public, but tickets are required. The next event is scheduled for May 2015.