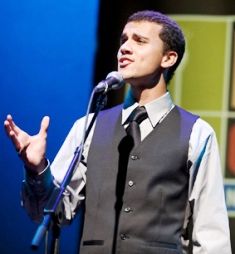 The 2013 Alabama Poetry Out Loud (POL) State Championship will be held Monday, Feb. 18 at the Alabama Shakespeare Festival, 1 Festival Drive, Montgomery. The event will include two rounds of powerful student poetry recitation, including an original poetry competition. This event is free and open to the public.

Round One of the 2013 competition will begin Feb. 18 at 10 a.m. on the Festival Stage. Fourteen students from across the state will compete as they recite two original poems each. At the end of Round One at approximately noon, judges will announce three winners for the state’s original poetry competition. An awards ceremony will be held immediately following this first round. The National POL competition will begin at 2 p.m. which will include fourteen additional students reciting up to three poems each from a provided anthology. The winner will be named Alabama’s Poetry Out Loud Champion and will move on the national competition in Washington, D.C., April 29-30.

POL is a national arts education program that encourages the study of great poetry by offering educational materials and a dynamic recitation competition to high schools across the country. POL uses a pyramid structure. Beginning at the classroom level, winners advance to school-wide competition, then to the state competition, and ultimately to the National Finals in Washington.

The official POL contest is administered at the state level by state arts agencies in all 50 states, the District of Columbia, Puerto Rico, and the U.S. Virgin Islands. POL is a national arts education program that encourages the study of great poetry by offering educational materials and a dynamic recitation competition to high schools across the country. POL uses a pyramid structure. Participating teachers use the POL toolkit to teach poetry recitation and run classroom competitions. Students select, memorize, and recite poems from an anthology of more than 650 classic and contemporary poems. Beginning at the classroom level, winners will advance to the school-wide competition, then to the state competition, and ultimately to the National Finals in Washington. Some 365,000 students from more than 2,000 high schools took part in the 2011–2012 POL Program.

In 2011, Youssef Biaz, a senior from Auburn High School and a student of Davis Thompson, became the National POL Champion in Washington. Biaz traveled extensively as a speaker and presenter of poetry, including a recitation at the White House where he shook hands with President Obama and received a hug from the First Lady.

In 2012, Alabama’s State Champion, Margaret “Peggy” Payne from St. Peter’s Academy in Limestone County, followed in the footsteps of Biaz to compete against 50 other students at the national competition in Washington.

Alabama’s POL program is administered by the Alabama State Council on the Arts in partnership with the Alabama Alliance for Arts Education. Another fairly new partner to the program is the Alabama Shakespeare Festival, who provides the venue and professional production crew to enhance the state finals.

About the Poetry Out Loud Awards

The winner of the POL Alabama finals will receive $200, and the winner’s school will receive a $500 stipend for the purchase of poetry books. The first runner-up will receive $100, with $200 for his or her school library. Additional awards for state contenders include monetary awards for the Original Poetry winners from the The Alabama Writers’ Forum. The state champion of POL final will receive an all-expense paid trip (with a chaperone) to compete in the National Finals in Washington, April 29-30. The POL National Finals will bestow a total of $50,000 in awards and school stipends, with a $20,000 award for the POL National Champion.

About the National Endowment for the Arts

The NEA is a public agency dedicated to supporting excellence in the arts – both new and established – bringing the arts to all Americans, and providing leadership in arts education.

About the Poetry Foundation

The Poetry Foundation, publisher of Poetry magazine and one of the largest literary organizations in the world, exists to discover and celebrate the best poetry and to place it before the largest possible audience. For more information, please visit www.PoetryFoundation.org.

About the Alabama State Council on the Arts

The mission of the Alabama State Council on the Arts is to promote Alabama’s diverse and rich artistic resources while highlighting excellence and educational experiences. The Council is the official agency for the support and development of the arts in Alabama. It was established in 1966 by an act of the Alabama Legislature. The goal of the Arts in Education program is to provide opportunities for Alabama students to learn through and about the arts, ensuring arts as an integral and essential component of education in the State of Alabama.

About the Alabama Alliance for Arts Education

The Alabama Alliance for Arts Education is a member of the Kennedy Center Alliance for Arts Education Network. The Alliance recognizes that the arts express the essence of civilization and nurture the highest aspirations of the human spirit and are therefore dedicated to support policies, practices, and partnerships that ensure the arts are woven into the very fabric of the lives of all Alabamians, especially children.

For further information, contact Diana F. Green, Arts in Education Program Manager, at the Alabama State Council on the Arts: 334/242-4076 Ext. 241 or diana.green@arts.alabama.gov.