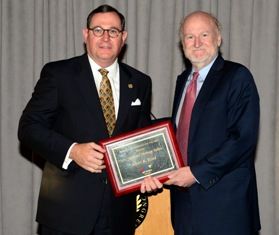 National Endowment for the Arts Chairman Rocco Landesman (right) presents Al Head, Executive Director of the Alabama State Council on the Arts, with the 2012 Bess Lomax Hawes National Heritage Fellowship Award on October 4 in Washington, D.C. The fellowship is the nation’s highest honor in the folk and traditional arts and recognizes an individual who has made a significant contribution to the preservation and awareness of cultural heritage.

At the ceremony, Landesman said, “An arts agency executive who has initiated folk arts programs in three states, Florida, Louisiana, and Alabama, Al Head is a tireless advocate for living artistic heritage as a key element in defining and expressing a state's shared cultural assets.”

(Photo by Tom Pich-National Endowment for the Arts)