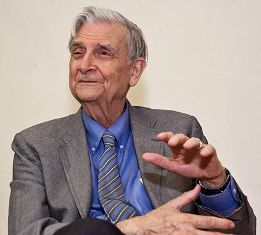 Edward O. Wilson, a native Alabamian and one of the past century’s most distinguished scientists, will be the featured speaker and main honoree at Alabama Humanities Foundation’s annual Alabama Humanities Awards Luncheon on September 10 at The Club in Birmingham.

Recognized as one of the planet’s most articulate authorities on the interrelatedness of knowledge disciplines and of life systems, Wilson is University Research Professor Emeritus and Honorary Curator in Entomology at Harvard University.

“We are honored to have such a distinguished native son as our Alabama Humanities Award honoree this year,” said Jim Noles, chairman of the AHF board of directors. “Dr. Wilson’s impact on the sciences and humanities truly cannot be overstated.”

Wilson is acknowledged for two interdisciplinary scientific disciplines (island biogeography and sociobiology), three unifying concepts for science and the humanities jointly (biophilia, biodiversity studies, and consilience), and one technological advance in the study of global biodiversity (The Encyclopedia of Life).

Wilson is best known, though, for his research into the Earth’s “teeming small creatures” – primarily ants, which were the subject of his exhaustive book The Ants (1991), one of Wilson’s two works to receive the Pulitzer Prize in general nonfiction.

Armand DeKeyser, the executive director of AHF, said that Wilson’s uncanny ability to convey the interconnectedness of so many different fields of study embodies the lasting value of the humanities in our life and our culture.

“Dr. Wilson has given readers so much pleasure by immersing himself in these various disciplines and articulating—clearly and beautifully—how they connect and why that matters,” DeKeyser said. “I, for one, can’t wait to hear him speak.”

Among Wilson’s more than 100 awards are the Crafoord Prize from the Royal Swedish Academy of Sciences; the International Prize of Biology of Japan; and the Nonino and Serono Prizes for Letters and Sciences of Italy. He was named one of the 25 most influential Americans by TIME magazine and one of the world’s 100 leading intellectuals by Foreign Policy magazine.

Wilson is the author of 28 books including the recent novel, Anthill, set in the woods of South Alabama; The Social Conquest of Earth; the soon-to-be-released profile of his boyhood hometown, Why We Are Here: Mobile and the Spirit of a Southern City.

The title of Wilson’s Alabama Humanities Awards talk on September 10 is “On the Origin of the Human Condition.”

In addition to presenting Wilson with the 2012 Alabama Humanities Award, AHF will present Regions Bank with the Charitable Organization in the Humanities Award and will recognize this year’s recipients of the Jenice Riley Memorial Scholarship, a $1000 award for Alabama K-6 teachers looking to further their professional development.

General tickets are $50 ($25 is a charitable gift) for the luncheon only. Patron tickets are $150 ($75 in goods and services), which includes the Jenice Riley reception prior to the luncheon and a gift, an E.O. Wilson book.

About Alabama Humanities Foundation:
As the state affiliate of the National Endowment for the Humanities, AHF strives to create and foster opportunities for scholars and the public to interact and explore human values and meanings through the humanities.