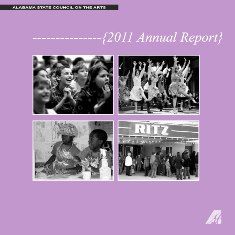 The 2011 Annual Report of the Alabama State Council on the Arts (ASCA) is now available online. The report highlights ASCA grants awarded statewide that support a wide range of art programs and arts education projects.

According to Julie Hall Friedman, past chair of the Council and board member of the Alabama Writers’ Forum, the document is an excellent arts advocacy tool for everyone in Alabama’s arts community.

“As ASCA executive director Al Head points out in his opening message, funding for the Council has decreased over the past five years, culminating in the record 25% cut in FY 12, yet the Council has continued to creatively support public arts programs, museums, folk arts apprenticeships, and many arts education programs across the state as it fulfills its mission to support arts and culture in Alabama,” Friedman said.

According to Head’s annual report message, “The arts are…the backbone of what is now becoming widely known as the Creative Economy, an economic strategy that targets those elements that attract creative professionals, creative businesses, and design concepts oriented to community growth. This progressive approach to economic development promotes new jobs, better jobs, and an enhanced work force environment.”

Friedman urged all arts leaders and arts advocates to become familiar with the ASCA 2011 Annual Report, noting the distribution of grant funds in their home counties, and how these data can help make the case for stabilized arts funding in the FY 2013 budget.

“In every instance, an economic impact occurred which includes artists employed, tickets sold, and the ripple effect to suppliers of everything from school arts supplies to printers of books and magazines,” Friedman said.

“As we make our case to our representatives and senators that the arts support jobs—having a quantifiable economic impact—this Annual Report provides invaluable data about arts dollars ‘at home,’” she said.

At a recent gathering in Montgomery with state arts leaders, Head pointed out that they should take every opportunity to educate elected officials on the issue of the arts in the creative economy, the arts as jobs stimulators, and the arts as enrichment to education for youth. He encouraged them to read the 2011 Annual Report, which was not yet public at the January meeting but is now posted online on the ASCA website.

In her “Message from the Chairman,” in the 2011 annual report, Friedman urges “frontline advocates for the arts” to “learn more about the impact the arts have on your area’s economy. Become versed in your community’s Creative Economy. Discover how many of your fellow citizens are employed in the arts sector. Include the number of jobs in both the for-profit arena, as well as the traditional nonprofit industries. Look into the tax revenue generated by the arts in your community.”

“All of us in the arts and cultural community understand almost instinctively the link between the arts, education, quality of life, and economic development,” Harrison said. “We must be enthusiastic and persistent in our conversations and interactions with our legislative leaders to foster in them an appreciation for the idea that public support for the arts reaches into and impacts the very communities in which they live and in those they represent.”

The emphasis that ASCA places on arts as a vital component of education and in learning is also highlighted in the 2011 Annual Report. The mission of ASCA is to enhance the quality of life in Alabama by providing access to and support for the state’s diverse and rich artistic resources.