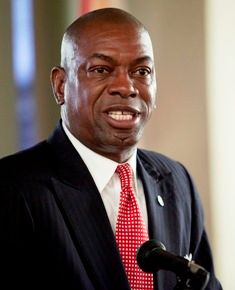 Rep. Oliver Robinson (D-District 58, Jefferson) delivered the keynote address at the book event for Let Me Tell You About Me on the Department of Youth Services Vacca Campus on November 3. Robinson, an NBA veteran, encouraged the student writers with stories from his youth.

“About fifteen percent of my life has been real good,” said Robinson. “The rest of it has been pretty difficult. But it didn’t matter that most of the time our mother raised us alone. It didn’t matter that I grew up in the Gate City housing project. I knew deep inside that I was going to be a special person.

“There were difficult times in my life when I had to take an opportunity and do the best I could. Life is going to be difficult, but because life is difficult you don’t have to make the wrong decision. Even today with all the success I’ve had, everyday is difficult, but it’s a blessing to go out every day and deal with this life.”

Robinson, who played for the San Antonio Spurs and was the first student athlete awarded a scholarship at the University of Alabama at Birmingham (UAB), further emphasized his commonality with the students.

Elected to the Alabama House of Representatives in 1998, Robinson received his BS in Urban Affairs from UAB. He is a member of the Bethel Baptist Church in Birmingham, Phi Beta Sigma, and the Birmingham Public Park and Recreation Board. He was also distinguished as the Birmingham Business Journal's Top 40, Under 40 in 1996.

One newly published writer read his poems from Let Me Tell You About Me. Seven members of the new class read their favorite poems from the anthology and samples of their new work.

When introducing the students, teaching writer and the book’s editor Tony Crunk said, “Each of these writers is a creative person. Each is an intelligent person. Each has surpassed the bounds of the imagination.”

Here are two sample poems from Let Me Tell You About Me:

The frozies my grandma makes are sweet,
Like licking Kool-aid powder off your hands.
The barbecue smell is attractive,
Like a free rib buffet.
The music is always loud,
Like the battle of the bands.
The babies crying
Are like a hospital.
Everyone wants to be hard,
Like a boxer throwing punches.
The gunshots are random,
Like picking a bingo ball.
The bullets on the ground are like a battlefield,
Like walking on rocks.
The girls fighting are like a war,
Every five seconds somebody falls.
The cars are like roller coasters,
Everybody wants to ride.
The abandoned houses are like junkies,
All torn up.
The dope dealers are like roaches,
Moving from corner to corner.
The police are like tornadoes,
When they come everybody hides.
The Feds are always catching someone,
Like throwing a fish net.
To me, it’s just another day in the projects.