Spend an evening with Winston Groom 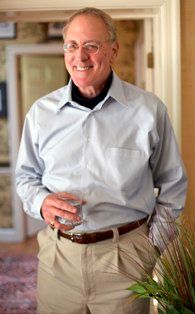 Join the Alabama Writers’ Forum for an evening with 2011 Harper Lee Award recipient Winston Groom on Thursday, November 17, 7-9 p.m. Free and open to the public, the event will be held in The Gold Room at Whitley Hall on the Troy University Montgomery Campus.

Groom will discuss and sign copies of his latest work, Kearny’s March: The Epic Creation of the American West 1846-1848. The book is an historical account of General Stephen Watt Kearny’s Southwestern military campaign during the Mexican War. Books will be available for purchase from Capitol Book & News at the event.

Groom gained literary fame when his novel Forrest Gump climbed to the top of The New York Times bestseller list and stayed there for twenty-one weeks. It has sold over 2.5 million copies in the United States alone and millions more worldwide on the heels of its blockbuster movie adaptation starring Tom Hanks. The book has also been reprinted in at least thirteen countries.

Born in 1943, Groom grew up in Mobile, where he attended University Military School. In 1965 he graduated from the University of Alabama with a B.A. in English and was commissioned as a second lieutenant in the U.S. Army. He served in Vietnam with the Fourth Infantry Division from July 1966 to September 1967 when he was honorably discharged with the rank of captain. He then spent the next eight years working as a reporter and columnist for The Washington Star before becoming a full-time author. He holds several honorary PhD degrees as a Doctor of Humane Letters.

He is also the author with Duncan Spencer of Conversations with the Enemy (Putnam, 1983), a non-fiction account of the experience of an American prisoner of war in Vietnam and a Pulitzer Prize finalist. In 2010, Groom updated The Crimson Tide (The University of Alabama Press, 2000), a one hundred year history of Alabama Football, to include the 2009 National Championship season.

Groom received this year’s Harper Lee Award for Alabama’s Distinguished Author of Year. The honor is given to a living, nationally recognized Alabama writer who has made a significant, lifelong contribution to Alabama letters. It includes a cash prize and a bronze sculpture by Frank Fleming of the Monroe County Courthouse clock tower. The courthouse is a setting for Lee’s novel To Kill a Mockingbird.

Groom lives with his wife, Anne-Clinton, and their daughter, Carolina, in Point Clear, Alabama, where he says he enjoys the public’s continued warm response to his loveable, unlikely hero, Forrest Gump. He believes, as Forrest says, “Always be able to look back and say, ‘At least, I didn’t lead no humdrum life.’”

The Gold Room at Whitley Hall is located on the Troy University Montgomery Campus at 220 Montgomery Street, Montgomery, Ala. 36104

This event is sponsored by the Alabama Writers’ Forum, a partnership program of the Alabama State Council on the Arts, Troy University Montgomery Campus Department of English, and Capitol Book & News.

For more information, contact the Alabama Writers’ Forum at 334-265-7728 or writersforum@bellsouth.net.