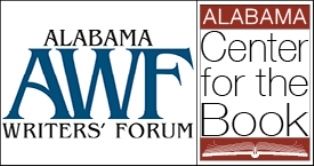 “Our state honors athletes, engineers, and musicians, among others, with Halls of Fame. We believe it’s time for Alabama’s rich literary heritage to be recognized in a statewide effort that showcases the best, from the beginning to the present,” Thompson said.

For the last four years, the Shelby County Arts Council, in collaboration with the Alabama Writers’ Forum and the Shelby County School System, have brought the program Writing Our Stories to CMS, the only public school in Alabama to have this pilot program.

On the dais, they made quite a contrasting pair, Mark Childress flamboyant in his yellow sequined sports jacket, Wayne Flynt distinguished in his black business suit. They hold in common, though, a keen intellect and a sharp wit. The two men had come to the 17th annual Alabama Writers Symposium in Monroeville on April 25 to receive the state’s highest literary and scholarly honors, Childress for the Harper Lee Award for Alabama’s Distinguished Writer of the Year and Flynt for the Eugene Current-Garcia Award for Alabama’s Distinguished Scholar of the Year.

Each year, Poets & Writers selects one state (or Washington, D.C.), and invites writers from that jurisdiction to apply for the Writers Exchange Award (WEX). For 2014, the state of Alabama was chosen. This year’s judges were Victor LaValle for fiction and Evie Shockley for poetry.

On May 4 at the University of Alabama in Huntsville, the Huntsville Literary Association (HLA) held its 46th Annual celebration of student winners in its Young Writers’ Contest. YWC is composed of elementary and middle school divisions in Huntsville and Madison County and a high school division that includes over 130 public and private high schools over North Alabama. The Ardent Writer Press supports the high school contest and publishes the student anthology, Expressions 2014-Student Voices from North Alabama, free of charge. All proceeds go back to HLA for student awards for the next year.

AWF Board member Michael Morris is honored in Panama City

The Alabama Library Association [recently] honored [Michael Morris’] Man in the Blue Moon, a 2013 novel set in Millville, Apalachicola, and Wewahitchka, among other Panhandle venues.

The 53rd annual author awards recognized books deemed the best of the year by the nonprofit advocacy group made up of school, public, and university librarians.

[Other winners were Rev. Dr. Carolyn Maul McKinstry for While the World Watched (nonfiction), Laura Golden for Every Day After (juvenile), and Jennifer Echols for Dirty Little Secret (young adult).]

The Birmingham Civil Rights Institute (BCRI) has named Priscilla Hancock Cooper as Interim President and CEO effective May 20, 2014. Cooper will replace Lawrence J. Pijeaux, who is retiring as BCRI’s President and CEO on May 30, 2014. Cooper served as a teaching writer in the Writing Our Stories (WOS) program at the Department of Youth Services Chalkville Campus from 1998-2012, when the facility was closed due to tornado damage.

Richard Modlin's novel, Newfound Freedom, has recently been selected as a finalist in ForeWord Review's 2013 Book of the Year Award in General Fiction.

Tim Parrish, representing university press writers, was recently invited to be the keynote speaker at the 2014 Eudora Welty Writers' Symposium in Columbus, Mississippi, on October 23, 2014.

Keep in touch with fellow writers through AWF Blogs

AWF Blogs feature essays and interviews by Alabama writers both well-known and not-so-well-known. Recent blogs include an interview with poet Jim Murphy by Sue Brannan Walker, an informative essay on digital inscriptions for eBooks by Michael Patton, and musings on life after print and broadcast journalism by Jacquie Wee Brasher.

Each week on the Alabama Arts Radio Series, staff members of the Alabama State Council on the Arts visit with writers, musicians, visual artists, and other individuals who contribute to our state’s rich artistic traditions. Recent literary interviews include Randall Horton, Jeanie Thompson, and Joseph D. Trimble.