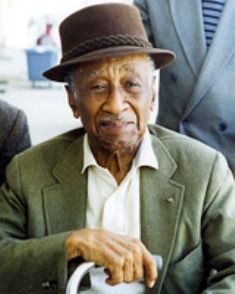 Noted writer and Nokomis, Alabama, native, Albert Murray, 97, died Sunday, August 18, 2013, at his home in New York. Recipient of the inaugural Harper Lee Award for Alabama’s Distinguished Writer of the Year in 1998, Murray earned his reputation writing about social justice, particularly in the South. An authority on the blues and jazz, Murray often incorporates the cadence of the music into his writing.

“The passing of Albert Murray, a native son of Alabama, marks the end of a life that produced an abundance of written and oral perspective regarding the cultural landscape of America that will become increasingly significant over time,” said Al Head, executive director of the Alabama State Council on the Arts (ASCA). “Murray, an internationally respected scholar, author, and story-teller reflective of his southern roots, ranks in the upper tier of luminaries from Alabama. While living the majority of his life in Harlem among his artist friends and the ever present sound of the jazz he loved, Murray always fondly remembered Alabama as home and return visits were special occasions for him, family, and old friends.”

Birmingham’s Michael Morris to join AWF board of directors

“Alabama has such a rich literary history, and I see the Alabama Writers’ Forum as a way of bridging that legacy with new voices across our state,” said Morris. “It’s an honor to join the board. I look forward to spreading the word about the Forum not only with other writers but also with corporations and elected officials.”

From the Forum’s President

Thank you for taking the time to read the Alabama Writers' Forum Literary News. We're honored to have you as a subscriber. I'd like to take just a moment and ask that if you receive the newsletter but aren't yet an AWF member that you consider joining. I'm entering my 12th year as a member, and I'm living proof of the benefits of membership. AWF has allowed me to network with peers in ways I wasn't able to before I signed up. That includes not only meeting great writers because I have a handy-dandy guide to all the literary goings-on in Alabama. It also means participating in readings and conferences through the AWF contacts I've made. I've had opportunities to publish reviews, participate in the Alabama Book Festival, organize literary events, and serve as a reader for scholarships. None of these things would have happened had I not written that first check so long ago.
More importantly than self-interest, however, I've also had the pleasure of supporting the literary arts in Alabama. I've been able to donate to the High School Literary Arts Awards, recognizing mentors and peers while rewarding deserving students. I've been able to offer my opinion regarding who receives the Harper Lee Award. Most importantly, I've had the distinct pleasure of learning through AWF's Writing Our Stories program how authorship empowers young people and changes lives. If I hadn't decided to join AWF a decade ago, I would be a far poorer man in terms of appreciating how the literary arts enrich our everyday lives.

So if you're not yet a member, please consider joining. You, too, can enjoy the excitement of watching the community of writers and readers thrive in Alabama.

New from The Ardent Writer Press.

The largest independent book festival in the country

A team of six Birmingham-area teens competed in the Brave New Voices International Youth Poetry Festival held August 7-11, 2013, in Chicago. #KnowDisclaimer is the first team to represent Alabama in the competition. The Birmingham team finished in the top twenty out of a total of fifty teams—rare for a first time team.

#KnowDisclaimer began when Birmingham Public Library Arts Literature and Sports Department Head Haruyo Miyagawa and John Paul Taylor, Founder and Executive Director of Real Life Poets, discussed ways to take an annual poetry competition, titled WORD UP!, to another level and decided to set their sights on Brave New Voices, a competition for youth poets in existence since 1998.

The 2013 Harper Lee Prize for Legal Fiction goes to Stanford law professor Paul Goldstein for his novel Havana Requiem. Not to be confused with the Harper Lee Award for Alabama’s Distinguished Writer of the Year, selected by the Forum, The Legal Fiction Prize, sponsored by ABA Journal and the University of Alabama School of Law, is intended to recognize a work of fiction that “best exemplifies the role of lawyers in society."

Emily Sheera Cutler’s play, The Road Trip, recipient of the 2013 Judy Lee Award for Dramatic Writing at the University of Pennsylvania Creative Writing Program, will be staged April 4-5, 2014, at the Bruce Montgomery Theatre on campus. A multiple winner of various Alabama High School Literary Arts Awards, Cutler is a sophomore at Penn.

Dr. Valerie Gribben published an essay, “Take Two Photos and Call Me in the Morning,” in the August 12 issue of The Wall Street Journal. Gribben also is a multiple winner of various Alabama High School Literary Arts Awards

Lindsay Hodgens, AWF intern, tied for 2nd place in the Humanities Division of the 19th Annual SAEOPP McNair/SSS Scholars Research Conference with her paper “Wait, I'm Blonde, so I Have to Bottom?—Physical Representations of the Gender Binary in Yaoi Manga." Held recently in Atlanta, the conference explored the theme A Beacon of Hope for Scholars to Conduct and Promote Research.

Joshilyn Jackson’s novel, gods in Alabama, was recently selected as one of the “25 Best Debuts of the 2000s” by First Fiction.

Filming wrapped in June on Blood and Circumstance, a movie based on a novel by Frank Turner Hollon.

Reach writers and readers at writersforum.org!

Digital ads in Literary News and writersforum.org help you reach a diverse literary audience of writers and readers. Our Advertise With Us feature is quick and easy. Place a low-cost ad for your publication or service with a few simple clicks.

For more information, contact Danny Gamble at gambledanny@bellsouth.net or the Forum toll free at 334-866-901-1117.

Summer is waning, and autumn will soon send us inside to light fires and kick back with a good read. See what’s new from your favorite Alabama author in the Forum’s Book Reviews Online.