Courage and Endurance: The Work of Mary Ward Brown 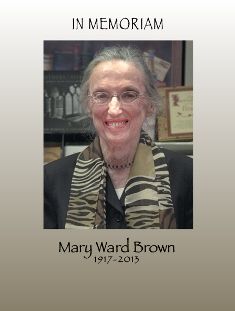 Mary Ward Brown of Perry County died on May 14, 2013. She was our most acute literary observer of life in Alabama. In her two volumes of exquisitely-crafted short stories, she captured a panorama of a specific place during a particular time: the Alabama Black Belt in the second half of the twentieth century. By so doing, she offers us a moving and sympathetic depiction of a region and a people under strain and in flux.

Mrs. Brown is a realistic writer. Like the work of writers she greatly admires—Turgenev and Chekhov of the nineteenth century, Hemingway and McCarthy of the twentieth—she strives for verisimilitude and precision in her stories. The heart of her writing is accuracy, believability, and richness of character. Other elements—setting, plot, theme, dialogue, conflict—are all ways of presenting and understanding her people. She tells wonderful stories and places them in memorable settings, but the stories are not the goal. They grow from the characters. "Action is character," wrote F. Scott Fitzgerald. That is, in a realistic work of fiction, what happens is a function of who is acting or being acted upon.

To develop and explore her characters well, she was very careful to make situation, dialogue, and event distinctive, authentic, and plausible—to tell "how the weather was," as Hemingway insisted. Therefore, her stories give us a powerful and moving sense of the Black Belt in change through the lives of its everyday people. The old plantation South has lingered longer in her region than in most, but it has gone, for both better and worse, leaving a legacy of social, economic, and racial conflict, of triumph and of loss, of friendship, of love, and of hatred.

Her purpose, however, is not socio-political documentation or historical record. Rather, she uses the tensions and conflicts of a closely-observed region in order to concentrate on her characters, to tell the universal and yet ever-new stories of love and hate, pride and acceptance, courage and endurance which have charted the self-conflicts of the human heart from Homer to Faulkner.

Who are some of these characters? The last remnants of plantation aristocracy, such as Mrs. Worthy of "New Dresses" or Rose Pardue Merriwether of "It Wasn’t All Dancing." Beloved black servants who help raise and shape some of the white characters—Mannie of "Beyond New Forks," Ella Hogue of "The Cure," and especially William Edwards of "Swing Low: A Memoir." Militant African-American civil rights activists such as Amzi Nettles of “Let Him Live” or Henry Philpot of "A Meeting on the Road." Unapologetic white racists such as Dr. Dobbs of "The Cure" or well-meaning ones like Ben Neighbors of "A Meeting on the Road." People of good will on both sides of the racial divide—Queen Esther of "Beyond New Forks," Carter Reese of "Let Him Live," and Mrs. Ward of "Swing Low: A Memoir." Middle-class townspeople such as Jean Goodwyn of "No Sound in the Night" or Fern of "The Birthday Cake." Hardworking yeoman farmers such as Miss Emma of "Goodbye, Cliff" and Asa Oakes of "The House that Asa Built.”

This catalogue gives you some sense of the breadth of the citizenry in Mrs. Brown’s Black Belt. It also sounds as though she is dipping into a well of familiar waters, ready-made stock characters from Southern genre fiction. That’s the risk of summation. Fitzgerald, himself one of the masters of American literary characterization, once observed, “Begin with an individual, and before you know it you find that you have created a type; begin with a type, and you find that you have created—nothing” ("The Rich Boy").

Above all, Mary Ward Brown sought to create individuals. If her characters sometimes become representations of types, it is only to the extent that she incisively shaped what she has seen, heard, lived through—known in her bones—during her eight decades of life in the Black Belt, almost all of it in the crossroads hamlet of Hamburg. Her intent was always uniqueness of character. The achievement of her art springs from a lapidary precision in selecting and arranging setting, dialogue, conflict, and action to present her people with all facets cleanly cut and sparkling with life.

Mrs. Brown’s two story collections, Tongues of Flame and It Wasn’t All Dancing, and her memoir, Fanning the Spark, are in print and available from the University of Alabama Press through your favorite bookstore, such as Montgomery’s Capitol Books.

You’ll find that her people and stories are rich with wisdom. I close with one citation to illustrate her economy and dialogue recognizable to anyone who has lived in South Alabama during the last half century, and—best of all—compelling and fascinating precision of language, her skill at incising character, her social realism, and the charm of her work. Rose Merriwether, protagonist of “It Wasn’t All Dancing,” speaks to her nurse, Etta. The central tension of this story comes from the interactions of two women—the aristocratic Rose and her African-American nurse and housekeeper. They slowly form a friendship, based on humor and mutual respect between two formidable personalities. Here it is Mrs. Brown’s ear for authentic speech patterns—vocabulary choices, rhythms, and tone—which both establish verisimilitude and develop character:

While Etta worked, they talked.

"You don’t have no other chirren, just that one girl?"

"That’s all. I didn’t want any more at the time. My husband did, but I didn’t. I should have tried for a boy at least, to carry on the name. What about you?"

"You didn’t want any either?"

"Not unless I was settled down—good husband and all."

Rose drew a quick half-breath. "I don’t guess you could say ‘yes, ma’am,’ could you? Would it set back the whole Movement?"

The silence that followed was dense with resistance.

Richard Anderson of Montgomery is an avid reader of Alabama literature and a fond appreciator of the fiction of Mary Ward Brown.