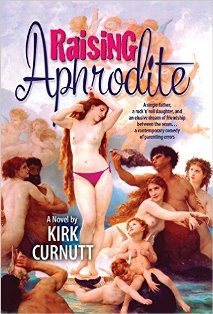 In Rogers and Hammerstein’s musical Carousel, Billy Bigelow, the erstwhile carousel barker, now married to Julie Jordan, is overjoyed when he learns he is to be a father. In the song “Soliloquy” he sings of his boy Bill. He’ll “teach him to wrestle and dive through a wave.” Bill might be a boxer or president.

Then Bigelow realizes: “What if he is a girl? What would I do with her? What could I do for her? A bum with no money. You can have fun with a son. But you gotta be a father to a girl…. Dozens of boys pursue her, many a likely lad does what he can to woo her from her faithful dad.” Bigelow is overwhelmed , and he has a wife to help him raise the child.

Vance Seagrove, PhD, the hero of Raising Aphrodite, however, is divorced, raising daughter Chloe as a single dad. Deb, Chloe’s mom, skipped out when Chloe was a baby. It is a difficult situation. Seagrove is as conscientious a dad as the world could imagine. He worries; he sacrifices; he communicates. But, alas, the novel opens with these lines: “My daughter, Chloe, celebrated her sixteenth birthday by having sex with her boyfriend.

“I find this out the morning after when I discover a suspicious wrapper in her trash basket. It’s not a wrapper from an Alka Seltzer tablet or a Klondike Bar.”

Some “likely lad,” it seems, has pursued her and caught her!

Dad is horrified, among other reasons because he impregnated Deb on his own maiden voyage, so to speak, so he knows this kind of thing can happen.

Acutely conscious of setting a good example and creating a stable home life, there have been very few women in Seagrove’s life; nevertheless, this worshipper in the church of Phil Donohue, this androgynous, hyper-feminized, guilty, nearly-paralyzed- by-the-fear-of-his-own-testosterone male has, unfairly, a reputation in Willoughby, Alabama, a small town outside Montgomery, as a Lothario, an exploiter of women.

This unjust reputation was sparked when he was caught in flagrante delicto with 20-year-old Ardita Farnam, a waitress at Katfish Kountry. Not only was he fifteen years older than Ardita—imagine that!—they are caught by her father on the floor of the Farnams’ lavishly decorated Alabama Room, a sanctum sanctorum in Alabama culture.

Because he is raising a girl alone, Seagrove is beyond sensitive to anything in himself that smacks of male chauvinism or gender prejudice, monitoring his language and second-guessing himself endlessly, wondering if he is “worthy of that thing called manhood.” He really works hard at it. He feels that “[m]en take, women are taken. Men get. Women get gotten.” He even reads theory by Andrea Dworkin –to oversimplify, all sex is rape—and there’s nothing more destructive to sensitive adult male confidence than that.

He muses, “I am humbled wondering how much hurt I may have caused over the last sixteen years of patting my own back for being a good dad.” Now there’s the farthest reach of self -criticism. His pride in being a good father may itself constitute abuse?

Seagrove was damaged by his mother’s early death from cancer and his wife’s desertion, true, but I wanted to shake him and tell him he is a good man, maybe too good.

Beyond his domestic, familial virtues, Seagrove is thoroughly civic minded. He is working to maintain a sculpture garden of Greek statuary and transform the park into a public venue for performing arts of all kinds, especially music.

Alone, he generates an infuriating amount of self-doubt, but others help add to it. His girlfriend Sadie, a singer/songwriter, the career daughter Chloe, our Aphrodite, goddess of beauty, aspires to, lectures him. She intensifies her criticism when she learns Seagrove has been unfaithful with his best friend Campbell. Campbell is a lesbian, “[b]ut every once in a while she falls off the wagon and onto me.”

Campbell’s ex-husband hires a private detective to see if she is really gay. He thinks she is lying and actually left him for another man which, one supposes, he could deal with better. Seagrove’s ex-wife shows up and stirs the pot. Far from being a villain, Seagrove is such an innocent he has no inkling of the vortex of sexual hanky-panky going on all around him.

Increasingly agitated and frightfully unlucky, before it’s over this peaceful schlemiel is plunged into several violent encounters, even losing his front teeth at a rock concert.

Aphrodite is a comic novel in the French farce tradition.