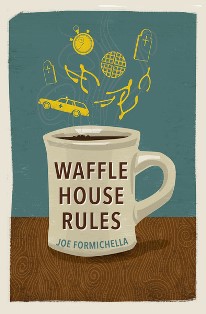 Joe Formichella has had considerable success with a book on a black baseball league in Pritchard, Alabama, Here’s to You, Jackie Robinson, and a first novel, The Wreck of the Twilight Limited, nearly a true-life novel about the catastrophic 1993 Amtrak train wreck on a bridge over Bayou Canot north of Mobile. His true crime book Murder Creek and the story of a basketball coach, Staying Ahead of the Posse, were less successful, but now, after some time, Formichella is back with a much more structurally complex novel. Waffle House Rules is ambitious and is, surely, Formichella’s best work to date.

To state that it is ambitious, though, is not to say it fulfills all its ambitions and meets all its own and the readers’ expectations. Formichella is trying for something big here. The action takes place over a number of decades and the full story is revealed not in the conventional chronological way but rather like the onion, in layers, or in fragments, bits revealed at odd times from unexpected sources.

The center of the action is the Waffle House in fictional Penelope, read Daphne, Alabama. One booth there is permanently occupied by “the Phils,” four old coots named Phil. They serve as interlocutors, act as a commenting Greek chorus, and give comic relief. The short order cook Rudy is in a permanent snit because the juke box has been replaced by a police scanner, but of course the Phils want the hottest news.

The Waffle House parking lot is oddly shaped and there is much merriment when large RVs and even an 18-wheeler get truly stuck.

The main thematic line, however, is blood, catastrophe, dismemberment, and death. The protagonist, Jimmy Ryan, becomes a trauma physician partly because his family—mom, dad, and brother—were killed in a car wreck. He is not singular. His entire class from the Fish River Community School seems cursed, one child a year killed in wrecks, tractor accidents, hunting accidents, go-cart accidents, drownings, leukemia, or shark attacks. They gain the nickname “The Last Best Class.”

Formichella places Dr. Ryan, ER physician, at the wreck of the Twilight Limited, but he can do nothing to help, only speculate on how the train arched through space like a spear, to its crash on the bank: “Time stopped.” Ryan observes, “It’s existence encapsulated.”

We see Ryan, even as a child, developing a kind of eccentric existential philosophy. He broods on the concept of Time. The “often arbitrary confluence of forces that brought him to that moment” is completed. But the future is unknowable; he refuses to make wishes, for example, with the Thanksgiving turkey wishbone or any other way. “He couldn’t remember ever looking forward.”

In fact on at least two occasions he explains: “If we knew beforehand the consequences of each decision we made, every action we took, we’d never get on a train, never get behind the wheel of a car. Hell, we’d never get out of bed in the morning.”

And, like all good contemporary Southern novelists, Formichella invokes the hurricane. If you knew the future “you’d never last in an area prone to hurricanes if you worried about things beyond a seventy-two-hour window.… You’d go crazy.”

For Jimmy Ryan, the only distinction that matters is between Life and Death. In one sense, philosophically, there is only the present moment, but as a trauma physician he develops his medical theory about the Magic One Hour, that window of time after injury during which, with speed and the correct procedures to fight shock, death can be cheated.

There are more plot turns and mysteries than can be remarked on here. Sometimes the reader is not sure what exactly happens in this novel and sometimes the abstractions seem cloudy, but Formichella deserves high marks for allowing his reach to exceed his grasp.