Time the Avenger, Time the Redeemer 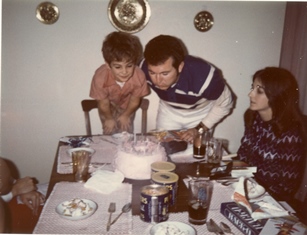 One of the first things I did after my father died unexpectedly in 1992 was count calendar squares back to his final birthday. He lived exactly forty-nine years and 108 days, I discovered. The precise number was important because I knew a time would come, if I managed to eke it out, when I would have to admit that I had lived longer than he ever did.

Knowing the number of days wasn’t necessary for calculating when this turning point would occur. That didn’t require much math. Because I was born on my father’s twenty-second birthday, all I had to do was flip forward a couple of decades and a deuce and go one day past the solemn anniversary whose observance would by then, I feared, have grown old hat.
The number was of more ritual importance. I needed it to imagine the countdown—or the count-up—I knew I would commence when I hit that final November 15 of my forties: 10 … 20 … 80 .. 100 …

March 3, 2014, I scribbled in a now-discarded notebook. Forty-nine and 109. It wasn’t intended as an Oedipal boast or taunt. It was a warning from my twenty-seven year-old self to prepare for the day I would lose my father all over again.

II.
On the surface, our 1 in 365 chance of being born on a parent’s birthday is not particularly staggering. Certainly not compared to the 133,225 to 1 odds of three generations sharing a birthday, or the astronomical but erroneous 48 million to 1 odds the UK’s Daily Mail cited in 2011 when a child was born on the same birthday that her parents shared. (The newspaper multiplied 365 once too often; 48 million to 1 is the odds of four generations being born on the same day).

Growing up, however, I didn’t know any other kids who wore the halo of this coincidence. It made my father and me secret sharers.

The bond felt even more special thanks to the symmetry of the number of years separating us. The two twos of that twenty-two were like feet, giving me balance, or arms that lent reach, or maybe even perfectly proportioned eyes on a face. Twenty-two felt neat and tidy, whereas numbers more widely celebrated as milestones—eighteen, thirty, fifty—looked lopsided by comparison.

The interval became the defining pattern of my life. I married twenty-two years after my parents, and a month after I turned twenty-two I myself became a father. My parents purchased my childhood home in 1972, I my son’s in 1994. And so on. I wasn’t imitating Dad; the landmarks of his life were simply my most natural stepping stones into adulthood, the handiest benchmarks for measuring my maturity and professional success.

I failed them as often as I achieved them, too. Around the age of eleven I discovered I wouldn’t graduate high school until 1983, twenty-three years after my father. Thanks to different school-district rules, he could turn five while in kindergarten in 1947, but I had to be that old before I could start in 1970. Despite my ardent pleas, my parents didn’t agree that symmetry was a valid reason for skipping a grade.

Much later, when I was admitted to graduate school, I had a panic attack realizing how long finishing a Ph.D. would take. Dad had zoomed through the chemistry curriculum at the University of Nebraska in three years and had a doctorate in hand at twenty-five. In English there was no such thing as a quick clip. As silly as it now sounds, when I accepted my diploma from Louisiana State University at the ripe old age of twenty-eight—a year after Dad died—I felt like a late bloomer.

Sharing a birthday with my father didn’t just make me aware of the concentric mile markers of our lives. It inspired a fascination with time itself, specifically the friction between the ways we measure it and the ways we experience it. As a literature teacher, I find it one of my favorite themes to debate with students. They don’t always agree when I insist that thinking about time isn’t a waste of it.

III.
As it happened, time was on my mind when my father died. That winter of 1992 I was drafting a dissertation chapter on the use of the present tense in 1980s’ short stories lumped under the derogatory label of “minimalism.” As with most of my interests, I’d thrown myself into the topic only to discover it was five years passé. Nevertheless, I loved dissecting works by Raymond Carver and Bobbie Ann Mason to argue that the fictional “now” in which they took place was far richer than some critics appreciated thanks to their interconnected themes of time, memory, and storytelling.

To generate ideas, I devoured recondite tomes on narrative poetics, including a three-volume series by the French philosopher Paul Ricoeur titled Time and Narrative. I won’t claim I understood much of it—certainly not enough to cite it.

Over the years I have returned to Ricoeur, partly in a wistful hope of mastering him, but mostly to remain connected with artifacts from that winter of loss. One specific sentence has helped me understand why a shared birthday made me feel closer to my father than, say, sports, our mutual love of the Beach Boys, or the five short years he reveled in being a grandfather: “Time becomes human to the extent that it is articulated through a narrative mode, and narrative attains its full meaning when it becomes a condition of temporal existence.”

What does that mean? Simply that stories allow us to come to grips with time, to not feel powerless at its passing, because our various senses of it are the templates we use to arrange experience into meaning. A story line with a beginning, middle, and end is only the most obvious pattern by which we shape events into significance. There are many others to which we’re less attuned: circularity, simultaneity, even forms that slip backwards as much as they flow forward.

If Ricoeur were to critique the significance I have invested in my twenty-two-year parallel with my father, he would probably say it has made me too dependent on dates. Our shared birthday made me so hyper-conscious of them that at an early age I became the chronologist of the family. Need to know what year Suzy the pony died out behind the creek? You know who to call. Wondering what year we traded in the Ford Falcon for the Bronco? I’m your man. Ford Madox Ford once argued that memory works by association rather than by chronological file-keeping, insisting, “Life does not say to you: in 1914 my next-door neighbor, Mr. Slack, erected a greenhouse and painted it with Cox’s green aluminum paint.… If you think about the matter you will remember in various unordered pictures, how one day Mr. Slack appeared in his garden and contemplated the wall to his house.” Yet my pictures have never been unorderly, even when I might have wished they enjoyed a little more—forgive me—slack. Instead, my memories have always come with a timestamp in the corner.

As far as practical talents go, a handiness with dates isn’t all that useful, except on trivia night. Ricoeur would roll his eyes. Time should be felt, he would argue, not tracked by numbers.
Most of the literature I assign would agree. Whenever I teach Proust, Virginia Woolf, or Faulkner I am acutely aware that their fiction rebels against the very sense of time by which I connect to my father. For these writers calendar time should be interrupted and debunked. Instead of the mind serving the clock, they insist we should give ourselves over to more private modalities such as rhythm, pace, and duration.

With a dramatic flourish, Ricoeur goes so far as to call calendars “Time the Destroyer”: they count the “public time” that relentlessly reminds us that we are marking years off of our lives. I prefer to think of dates as “Time the Avenger,” after the underrated 1984 song by the Pretenders. It is the time that is not on our side, the time that humbles us by insisting, “Nobody is permanent / Everything is on loan here.”

Yet for twenty-two years remembering my father through dates has allowed me to keep him alive in ways that other storytelling patterns have not. At any given moment I have been able to spring laterally from my life into his and summon him up at various ages. Whether I am recalling his disappointments or his jokes or a simple anecdote, the synchronicity of our shared birthday has been my mnemonic device. It has helped me conscientiously preserve someone who, if life were fair, would be here turning seventy-two as I turn fifty.

Only now the story of that shared birthday has reached its natural end. What is the significance of having outlived my father by exactly one day? Obviously, it means the final loss of his example as I step off into spans of time he never experienced. And yet time doesn’t have to destroy—it can also redeem, depending on how creatively we intervene in it. Losing one measuring stick poses the challenge of finding new ways of accessing the past and keeping memories vibrant and alive.

To that end, I have spent my countdown to forty-nine and 109 poring through literary treatments of time and memory looking for models. Borrowing from Proust, Woolf, Nabokov and many others, I’ve developed little meditation exercises I do on my drive into work. Whether through free association, sensory stimuli, or even reimagining our relationship through the metaphors and motifs of his profession rather than mine, I tell and retell stories about my father with just one firm rule: I must speak in the present tense. This way our “now” takes place off the clock, where the gulf of time can’t swallow up Dad’s relevance to me.
Occasionally on my commute I realize fellow drivers have caught my lips moving as I practice my version of the talking cure. I smile and wave. They laugh, assuming I’m either singing to the radio or cussing out the traffic. I’m not embarrassed. They think I’m killing time when in reality flexing the memory muscle is the most productive use of it possible.

Photo: Kirk Curnutt and his father, 1971, turning 7 and 29 respectively. (courtesy of the author)

Kirk Curnutt, president of the Forum’s Board of Directors, is professor and chair of Troy University’s Montgomery campus in Montgomery, Alabama. He is the author of two novels, Breathing Out the Ghost and Dixie Noir, a fictional dialogue with Ernest Hemingway titled Coffee with Hemingway, and critical studies of F. Scott Fitzgerald and the Beach Boys’ Brian Wilson.